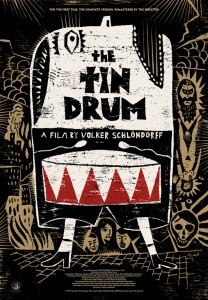 Director Volker Schlöndorff has restored twenty minutes to his 1979 adaptation of Günter Grass’ teeming novel, “The Tin Drum,” about polymathic child Oskar Matzerath, who simply does not grow up in the face of the onrushing madness and absurdity of Germany in the 1920s and 1930s. The original running time was defined by then-distributor United Artists, which mandated a two-hour-fifteen-minute length to insure time for two evening shows at theaters. Several years ago, Schlöndorff found that the negatives of the unused footage, in storage for three decades, was “virgin-like,” and set to fashioning the version they were never able to complete. “In the end,” Schlöndorff writes in the press kit, “we did not want a totally different movie; we wanted to produce the real one—the complete one—the one we shot back then.” If you haven’t seen the film in ensuing years, the epic panoply of the garish and grotesque will seem fresh and of a piece: a swarming fresco that is bitter, shocking, phantasmagoric and often gruesomely, wondrously funny. Written by Jean-Claude Carrière, Schlöndorff and Franz Seitz. With David Bennent, Mario Adorf, Angela Winkler, Daniel Olbrychski, Charles Aznavour, Katharina Thalbach, Heinz Bennent. Winner of the Palme d’Or at the Cannes Film Festival and the Academy Award for Best Foreign Language Film. 163m. DCP. (Ray Pride)

“The Tin Drum: The Director’s Cut” plays Saturday, Sunday and Tuesday at Siskel. An earlier, Australian trailer is below. Schlöndorff describes the changes in the Janus Films press kit.