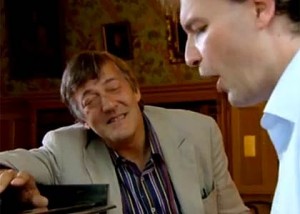 Stephen Fry is deeply into the being-Stephen-Fry gig in “Wagner & Me,” (2010) an affable, amply self-absorbed reflection on the implications of the composer’s life, work and legacy that could have just as readily begun with the word “me,” as in “Me & I.” Not that there’s nothing so wrong about Fry’s cheery and sometimes daffy solipsism in the service of his fascination with Richard Wagner, down to his postmortem associations with the Nazi era. He and director Patrick McGrady travel to Zurich, to Nuremberg, to the Bayreuth Festspielhaus. As Fry told the Guardian on the film’s UK release, ” I grew up in a Jewish household. My mother is certainly not religiously Jewish, but a lot of her family, and therefore my family, were destroyed by Nazism, and Wagner became associated for her with Germanic horror. So when I started playing Wagner loudly, her eyes would close and she’d say, ‘I know you like it and that’s fine, but really you know, what’s wrong with Mozart?’ It was always an issue. Something to confront.” Which Fry does, with his customary, learned fervor. Key line: ”I touched a Wagner!” 89m. HDCAM. (Ray Pride)

“Wagner & Me” opens Friday at Siskel. The trailer below tells the tale.