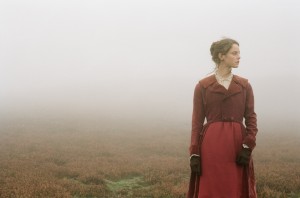 In her prize-winning shorts, including 2005’s Oscar-winning “Wasp,” and two earlier features, “Red Road” (2006) and “Fish Tank” (2009), writer-director Andrea Arnold finds surfaces and glances that reveal inner states, as if a conjuror of emotional weather. Her bold, raw, pungent, insistently animal adaptation of “Wuthering Heights” (2011), takes her weather to literal extremes, shooting during inclement torrents in fall across the North Yorkshire moors. Emily Brontë’s 1847 novel has been adapted in other times and other ways, but has never been made so tempest-tossed. Arnold describes the book as “gothic, feminist, socialist, sadomasochistic, Freudian, incestuous, violent and visceral” and leaps off the cliff from there. There’s glum splendor to spare in Robbie Ryan’s begrimed but never less-than-luminous photography, and Arnold’s casting of Cathy and Heathcliff at two different ages is fine: faces are still as the world around them swirls. Rain and fog obscure a sufficient number of scenes to suggest the film, like glass itself, is somehow faultily annealed, one with the building craft of the era. The sound design takes the place of a score, and it’s heart-swirling, too. With Kaya Scodelario, James Howson, Solomon Glave, Shannon Beer, Steve Evets, Oliver Milburn. Like Arnold’s other films, “Wuthering Heights” was shot in the square, “Academy” ratio. 128m. Reviewed in 35mm. (Ray Pride)

“Wuthering Heights” opens Friday at the Music Box. A trailer is below.