What do these films—a sturdy roster in any single year—have in common? Their producer-financier, twenty-six-year-old Megan Ellison and her production company, Annapurna Pictures. Who’s benefited from the handiwork of this beneficent billionaire? Aside from Andrew Dominik, whose “Killing Them Softly” opens Friday, let’s list John Hillcoat, Paul Thomas Anderson, Kathryn Bigelow, and soon, Harmony Korine (“Spring Breakers”), Wong Kar-Wai (“The Grandmasters”), Spike Jonze, and Bennett Miller, as well as the makers of a new “Terminator” film. Movie-news aggregator The Wrap featured an article in October by its editor, Sharon Waxman, unloading on the young producer. “Well-meaning financiers like Ellison will ruin what is left of the independent movie business,” she editorialized. “Spending so much on these art-house films almost guarantees they will be money losers, and that is bad for the movie business altogether… But the overall effect on the landscape for quality movies is not a good one. Every big-ticket failure kills another great movie in its infancy.”

True? False? Waxman offers no evidence for her platitudes and seems offended that money will be lost: she’s more about the money than the art form. And it’s not like the current studio system is set up to make middle-budgeted movies of aspiration or innovation from established filmmakers. Plus, the downfall of markets in 2009 led to the dissipation of the middle range of hopeful millionaires drawn to the flickering flames of film finance, to the point that the kind of “independent” filmmaking that thrived in the 1990s is virtually nonexistent today. Off-Hollywood has always subsisted on generations of eager marks.

But how many Megan Ellisons can exist? How many (or few) billionaires are there with an interest in films that will have influence past the opening weekend? Not the well-heeled, but the truly well off, not the one percent, but the .01 percent? Who else would be talking about putting Paul Thomas Anderson in charge of Thomas Pynchon adaptations? 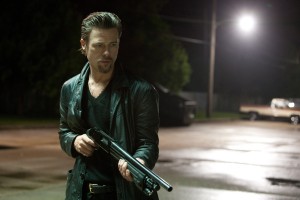 And then there’s the muscular filmmaking. While Dominik’s images are often uncommonly beautiful, as in his 2007 “The Assassination of Jesse James by the Coward Robert Ford,” with strong compositions and subtle grades of texture and shadow, bold close-ups and disorienting use of focus, he uses image and sound to convey more than simply story, or plot. In a Sunday New York Times piece by Mekado Murphy, a single scene’s sound is dissected at length. Sound designer Leslie Shatz, who’s worked on films like “Day Night Day Night,” “The Loneliest Planet,” “A Single Man,” “Elephant,” and “Gomorrah,” as well as “Assassination of Jesse James,” also was on Norman Mailer’s gangster blow-out, “Tough Guys Don’t Dance.” Sounds from that film were drawn from Shatz’s personal library, including punches that began as Mailer punching himself after dissatisfaction with the way body blows sounded in other movies. There’s dumb poetry in the repurposing of an element like that, but it’s one component among many that indicate Dominik’s furtive intelligence at work.

This physical world is malleable, the means to disconcerting loveliness and expressive power, the glory of decay, the suddenness of violence, all under cover as a political parable in the form of an urgent, restless gangster picture. Rain falls, words tumble, violence erupts. Lyricism ensues.

“Killing Them Softly” opens wide on Friday. A trailer is below.