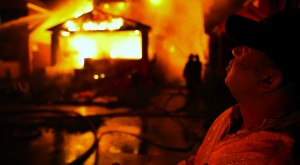 Tom Putnam and Brenna Sanchez’s “Burn: One Year On the Front Lines of the Battle To Save Detroit” documents Detroit, the American city with more fires than any other, and in the process, the frontlines of an American city’s destruction, one building at a time. Flames, gushing water and impossibly loud rock songs part the hair from the get-go. Even more affecting than the intense, in-the-moment fire footage are the stories of the firefighters themselves, centered on Engine Company 50, one of the busiest in the country. The scale of the film is impressive, due largely to its range of supporters, including General Motors. Denis Leary and Jim Serpico executive-produced. 86m. (Ray Pride)