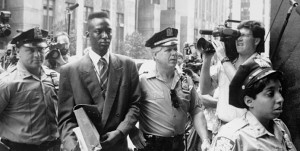 Ken Burns and co-directors David McMahon and Sarah Burns (his son-in-law and daughter) serve up outrage over the 1989 case of five black and Latino teens from Harlem who were charged with the beating and rape of a white female jogger in Central Park, then imprisoned for six-to-thirteen years each before a confession by the actual criminal led to their convictions being overturned. (Their names: Kevin Richardson, Yusef Salaam, Raymond Santana, Korey Wise and Antron McCray.) “The Central Park Five,” which failed to make the Academy’s Best Documentary shortlist of fifteen this week, combines the tragedy of the wrongfully accused with an impression that Ed Koch’s New York City had become little more than a paranoiac shithole. It’s never less than gripping, and the cleanly designed and sleekly edited format is a criminal investigation of the kind of racially motivated miscarriages of justice that are too seldom taken up by contemporary journalists. (Some early reviewers since its Telluride Film Festival debut in September, including the New York Times’ Manohla Dargis, have pointed out elements of the case that are omitted from the film’s telling.) It’s a Ken Burns portrait of an America of which not to be proud, and one with repercussions that persist: An opening title alerts us that the prosecutors and police involved with the case would not comment at all. (And, the NYPD have subpoenaed outtakes from the film’s interviews.) Koch is heard being a hard man toward “those who perpetrate monstrosities” while shortly after, one of the defendants will say of Harlem at that time, with a verbal shrug, “No one cared if you lived or died.” Along with strong use of archive footage, each talking head, including now-elderly jurors, takes the case deeper and farther into its own level of criminality. Taken at face value, it’s a portrait of a one criminal case, but also a despairing, withering picture of American justice. A weighty negative: the music selection largely stinks. 119m. (Ray Pride)

“The Central Park Five” opens Friday at the Music Box.