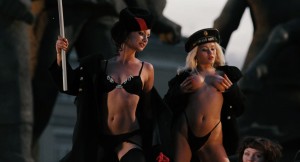 A raft of semi-comprehensible tumult in satirical drag, Victor Ginzburg’s frenetic adaptation of Viktor Pelevin’s novel “Generation P” spends itself in gonzo aspiration and colorful pre-millennial proto-anti-capitalist mayhem. It has a matter-of-fact baroque that suggests an image of novelist-present-tense-futurist William Gibson sitting in Vancouver, smiling, even if unaware of the film’s existence. Set in Moscow in the 1990s at the rise of a new Russia after the end of the Cold War and the USSR, poet Babylen Tatarsky is inducted into copywriting as well as a mysterious group known as the Cult of Ishtar. Those sympathetic may find a touch of lysergic screwball, a report on a gangsterism of ideas: other viewers may simply see it as unhinged disorder. (I like it.) Notably, the film’s chauffeur-turned-president of Russia bears an undeniable resemblance to the country’s present plutocrat-for-life Vladimir Putin. With Vladimir Yepifantsev, Mikhail Yefremov, Andrei Fomin, Sergei Shnurov, Vladimir Menshov, Oleg Taktarov. 116m. (Ray Pride)