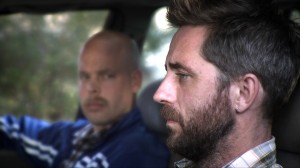 The spare, affecting “New Jerusalem” (2011), writer-director-editor-photographer Rick Alverson’s second feature to be released in Chicago after hostility-fest “The Comedy,” is that rare attempt to seriously reflect on the evangelical, proselytizing personality. Will Oldham, whose career as an actor began as a teen preacher in John Sayles’ “Matewan” (1987), plays the Christian who befriends and attempts to shelter and succor a broken Irish immigrant (Colm O’Leary) just returned from Afghanistan who works alongside him in a gone-to-seed tire repair shop. A utopia described in the Book of Revelation, the “new Jerusalem” may be far from the reality of their daily routine, yet Alverson’s accomplishment lies in engaging with their desire, their need, to find something to validate their legitimate shreds of hope. Oldham brings the same convincing tenacity to his character as in Kelly Reichardt’s “Old Joy” (2006). 94m. (Ray Pride)

“New Jerusalem” opens Friday at Facets. A trailer is below.