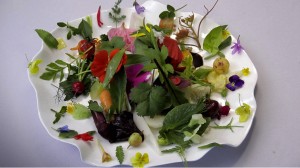 Tasty perfectionism in big, bold colors is on the menu in Paul Lacoste’s “Step Up To The Plate” (Entre les Bras), another worthy process documentary on the making of food and flavor, but it’s also about the bond between father and son. Influential French chef Michel Bras (about whom Lacoste made an episode in a television series three decades ago) is about to turn over his restaurant, a three-Michelin-star establishment in the south of France, to his son Sébastien, who has worked with him for fifteen years, and Lacoste spends a year watching and implicitly goading the ultimate handover. “Step Up To The Plate” is a decent contribution to the burgeoning art-house foodie nonfiction genre, and akin to a couple of impressive recent doc-bites, including Gereon Wetzel’s chilly portrait of chef Ferran Adrià in “El Bulli: Cooking in Progress” and David Gelb’s toothsome “Jiro Dreams of Sushi.” The secret ingredient in these three courses: the food, the flavors, come from the subjects. Food, on its own, requires a driven clinician like Nikolaus Geyrhalter (“Our Daily Bread”) to make the processes sing. 89m. HD. (Ray Pride)

“Step Up To The Plate” starts service Friday at Siskel. A trailer is below.