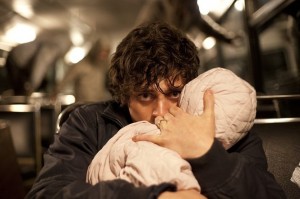 Glum Irish micro-terror, “Citadel” is a clammy accomplishment in primal fear by first-time director Ciaran Foy. In “Edenstown,” a wintry world of battered apartment blocks (shot in Glasgow), a single-father Irish agoraphobic (Aneurin Barnard) must battle a feral gang endangering his infant daughter. The results, inside many confined spaces and often in dark beyond dark, are taut, tough and troubling and hardly for the soft of heart. Foy’s immediately deserving of a wider canvas for his substantial formal skills. While on a different wavelength, “Citadel” shares with “Harry Brown,” “Attack the Block” and “The Raid: Redemption” the prima facie presumption that immense urban blocks peopled by a disenfranchised underclass will devolve inevitably into shitholes and moves on from that as a given. Cinematographer Tim Fleming has made notable advances since the loving grime of “Once.” Based on a true mugging. With James Cosmo, Wunmi Mosaku, Amy Shiels, Jake Wilson. 84m. (Ray Pride)