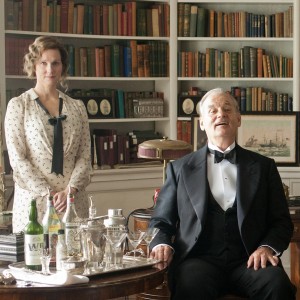 Who ya gonna call? FDR! Just because Bill Murray can do anything he wants doesn’t mean he should do anything. Still, there’s always the cornucopia of interviews and talk-show appearances that accompany any new movie, and that’s a blessing almost beyond compare. “Hyde Park on Hudson,” not so much. A parallel project to the Oscar-winning “King’s Speech,” set in June 1939, “Hyde Park on Hudson” fictionalizes a June 1939 meeting between President Roosevelt (Murray) and the King and Queen of England (Samuel West, Olivia Colman). Olivia Williams is on hand as Eleanor, and Laura Linney plays Daisy, an intimate of the president. Director Roger Michell has made small, compelling, dark movies like “Enduring Love,” “Venus,” “The Mother” and “Changing Lanes,” as well as commercial comedies like “Notting Hill.” Aside from a handsome burnish in its dingy-around-the-edges design, there’s little life in the narrated waxworks: no manic pixie dream savior, this FDR. There are a number of equally dingy sexual innuendos best left to a compulsive washing of the hands after viewing. Murray brings gravity to speechifying and the supping at a glass of whiskey. Is this the Bill Murray we love? He does not embarrass himself. But his sly grin when Eleanor is described as lovely elicits a “She’s… a strong… person” of consummate delivery. Such grins do not translate to mirth. Superfluity rules the day. Richard Nelson adapts his BBC radio play. Memories of Murray serving coffee to RZA in “Coffee and Cigarettes” bubble to the surface. With Elizabeth Marvel, Elizabeth Wilson, Eleanor Bron. 94m. (Ray Pride)