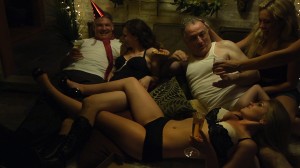 Digital technology has changed the worlds of film distribution and film production, but there’s always one constant: in Chicago, every third feature that sees the light of day must have a gangster, or a confused foreigner, and the filmmakers must think that gangsters are a hoot and stupid. Technology changes nothing! Boris Wexler’s imperturbably awful “Roundabout American” starts wrong in the first note of its score, with dreadful, cheap-sounding accordion and xylophone music accompanying crude silhouette animation.  A young Frenchman trades cultural stereotypes with a twice-life-size Ron Jeremy lookalike in a tie-dyed muumuu of a T-shirt, leading him to drunken nights and a female escort service run out of a pizza delivery business. Dreadful music also accompanies touristic montage of characters banging around the Bean and the Chicago River downtown, a gentle good thing for keeping the dialogue down.It’s eighty-five minutes of high-achieving vulgarity, failing to make the cases for “sight” “gags” of overweight men in tighty-whities brandishing voluminous man-jubbies at the camera. The cinematography is as homely as oil pooling on the pavement in front of a rundown gas station. With Édouard Giard, Marielle de Rocca-Serra. 85m. HDCAM video. (Ray Pride)