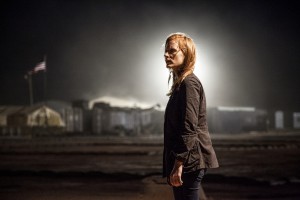 Lean, reserved, working by implication, without overt declaration of intent, Kathryn Bigelow and Mark Boal’s “Zero Dark Thirty” is an observant procedural that builds on the virtues of their Oscar-winning “The Hurt Locker,” and a rare large-scale fiction film that presumes that its viewers may be able to follow a story without their small hand being tightly clutched. It’s a daunting achievement, a stern drama, and the best American film of 2012.

Writers on the subject of American torture in recent and current wars, including journalist Jane Mayer of the New Yorker and attorney-blogger Glenn Greenwald of the Guardian, have militated for a preemptive boycott of what they see as endorsement of waterboarding and other likely war crimes depicted on screen; Greenwald was on the attack even before seeing the film. But to show a thing is not to endorse it: that would make the very existence of an “antiwar” film impossible. I don’t know if Greenwald or Mayer watch fictional movies as consumers: footnoted documentary seems their fashion. Or, at least, fiction that confirms their deeply embedded perspective. (Like several other pre-critics, what they have sent sailing onto the internet seems intent on protecting their own private Homeland.) Is it moral? the scolds ask preemptively, before the film has been seen by the public, and weeks before the “Zero Dark Thirty”‘s January wide release.

The movie opens on an exquisite, excruciating séance on black, a re-creation of ninety seconds of voices, not raised on high, but uncomprehending of the moment they are in, speaking in the few instants they have remaining on the morning of September 11, 2001.

Years pass in a single frame, before we meet our protagonists. Jessica Chastain plays a composite figure, called Maya (based on a real-life CIA analyst) with physical precision. Maya has confrontations and surmises to assert, but Chastain’s acting is physical: seemingly unprepossessing but possessed through-and-through. She’s surrounded by a succession of mostly Australian and British actors who play an equally coiled variety of American men, the impression of rectitude buoyed by chiseled good looks and elemental physicality.

“How’s the needle-in-the-haystack going?” one of the men teases Maya as she runs down another in a pattern of leads and false clues that course across a decade. And then there’s the known-known of the Rumsfeld-echoing, Bush-mocking snowflake of an exchange, “We don’t know what we don’t know.”

“What the fuck does that mean?”

A pause and a shake of a shaggy head: “It’s a tautology.”

Terms of art chatter like staccato poetry. Boal’s dialogue is hard-boiled, but rises above efficiency and tough-guy postures. The language of spycraft is deployed at varying weights, as flickering particulars, strategies are spoken like in Michael Mann’s “the Insider.” We may not know what the words mean, but we know immediately what they hold. A tossed-off “I’m not that girl that fucks, it’s unbecoming” is as fierce as a swamping soliloquy.

Torture is shown. Extreme interrogations are depicted. George Bush’s “Mission Accomplished” speech plays on a television, no one listening, largely obscured by characters’ heads, and later, Obama is seen on “60 Minutes” asserting that torture will not be American policy. But torture is hardly excused. The mere fact it is depicted as something that happened: that startles. A key moment is over breaking of bread between interrogator and subject, with a key needle of the haystack threading after eons of perseverance. (Luck? Happens to those who are prepared for it.)

“Zero Dark Thirty” aspires to the condition, not of objectivity, but of reportorial ambiguity, of the sort brilliantly executed in Gillo Pontecorvo’s masterpiece, “Battle of Algiers,” a film so exacting in its depiction of terror techniques that it’s recurrently shown by the government as a teaching tool. In Bigelow’s film, the viewer is not in the precise position of a player in the drama, but the necessity of piecing together clues along with the characters on screen is consistently compelling. History weighs on fatigued shoulders. We’re living in their physical world.

In one of his many scores this year, Alexandre Desplat’s music sounds restrained, a taut thread, a percussive heartbeat. Listened to separately, outside the film’s sound design, figures emerge. Still, my favorite element is near nightfall, before the attack, when horns like those in David Shire’s score for “All The President’s Men” emerge, bleak and deeply weary, richly forlorn. One needle in the haystack.

“Zero Dark Thirty” opens on visual absence and aural catastrophe, and at its end, in echoing space, as Maya sits, drained, alone, mission completed—”Geronimo. For God and Country. Geronimo”—those voices resonate, as if the movie were on a loop, a mad Möbius strip. This is one of many resemblances to work as depicted in David Fincher’s “Zodiac”; are we defined by the work that comes to defeat us? And is “solving” ever a solution? For once, Maya closes her eyes.