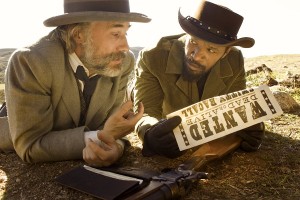 To be antic and spastic and comic in the fiery face of American slavery is counterintuitive, but Quentin Tarantino leaps into the flames. “Django Unchained” finds only-son Tarantino burnishing his fixation on rafts and ranks of movies no one else has ever seen, as well as clannish brothers, foolish Klansmen and heroic underdogs, along with a bold bloodlust that tips his hat to the Sams Peckinpah, Fuller and Raimi as well as the Monty known as Python. The plentiful blood squibs gallop as much as detonate. It’s a tectonic mad-lib Spaghetti Southern readily dubbed as “Sweet Quentin’s Baadasssss Song,” in which a white, German bounty hunter named “Dr. King” frees a slave (Christoph Waltz, Jamie Foxx). Start at “What-the-fuck” and stir in copious splatter, exsanguinations, enunciations of “nigger”: fraudulent pageantry becomes rich pop movie tapestry. (This would be the movie to see on 42nd Street very late at night if 42nd Street only still knew “very late at night.”) Tarantino culls from the crunchiest, most disreputable reaches of cinematic effluvia, the depths of which will only be fully unearthed through Tarantino’s own eager footnotes in interviews and commentaries. But despite the project being a galloping example of counterfactual burlesque and buggery of all that is dearly P.C., “Django” finds an overall rhythm that eluded the similar project of “Inglourious Basterds” and intention can be deciphered scene to scene. The scale of “Django” is tethered to its titular figure, a slave whose simple quest to become a freeman, to be with his sold-away wife, lending a focus and velocity. In the film’s three hours, some scenes go on too long, others could go on for hours, and some are just dumb. But the transformation of Foxx’s Django from mute to bounty hunter under the tutelage of Waltz’s mercurial mentor is moving if erratically depicted, as in the more assured telling of Ang Lee’s underappreciated “Ride With The Devil.” Waltz’s Dr. King is an effortless riding partner for Django, capable of so many quicksilver moods in performance the way so many notions must clank and clatter deep inside Tarantino’s shaggy head even as I type. Foxx is solid star material and Waltz resides at Trickster central, yet Samuel L. Jackson commands the screen in every gesture, capturing with glee and sleek proficiency what he calls “the most reprehensible negro in cinema history.” His Stephen is unholy and great. With Leonardo DiCaprio, Kerry Washington, Walton Goggins, Dennis Christopher, James Remar, Don Johnson, Jonah Hill, Tom Wopat, Don Stroud, Russ Tamblyn, Amber Tamblyn, Bruce Dern, Lee Horsley, Zoe Bell, Michael Parks, Tom Savini, Robert Carradine, Tarantino. 165m. (Ray Pride)