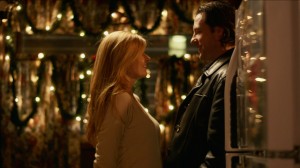 With “The Brothers McMullen” 1995 years ago, Edward Burns was the gleaming profile of 1990s indie success. The industry’s changed in the years since, but has Burns? With his recent “Newlyweds” and now “The Fitzgerald Family Christmas,” Burns is using the limited-theatrical/largely-video-on-demand model for microbudgeted stories that appeal to those who’ve liked his films before, as adroitly, on a smaller scale, as Tyler Perry. Burns, in fact, has repeatedly said of late that it was Perry who told him to burnish his “brand”: “Those first two movies were so successful. In fifteen years, why have you never gone back there? Look at what I’ve done… super-serve your niche.” And weirdly, wisely, he’s done just that: there’s nothing world-chewing and little beyond elemental Irish family stereotypes in “Fitzgerald Family Christmas,” and its simple, relaxed rhythms are soothing. With this multilayered take on nine Irish-American battlers over an abbreviated holiday season, Burns is the face of the present. The ensemble pleasures of his players are genuine. With Burns, Kerry Bishé, Caitlin Fitzgerald, Anita Gillette, Ed Lauter, Michael McGlone, Noah Emmerich, Connie Britton, Joyce Van Patten, Brian D’Arcy James, Malachy McCourt. 103m. (Ray Pride)