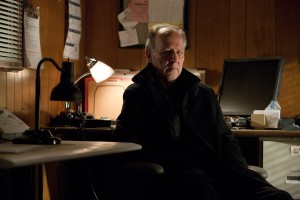 Tom Cruise stars in “A Tom Cruise Production” as a character with “no character arc,” as Lee Child characterizes his seventeen Jack Reacher novels to date. The Brit author links his off-the-grid do-gooder to legend: “the ‘knight errant’ is what they called him in literary criticism terms,” he offers in press notes for the pulpy entertainment billed and branded as “Jack Reacher.” This retired military investigator dresses Goodwill, travels Greyhound. His fight style?  Keysi from Spain. When he kicks butt, it really means “kicks nuts.” No A-list American male action star has ever kicked, clubbed and punched so many bad guys in their manly parts. Nearly every woman, including extras with no lines, shoots a hot look in passing. “Jack Reacher” starts with a rubber-gloved sniper killing five people in Pittsburgh in under one minute. Yet fingerprints lead to a tight-lipped Iraq vet who only writes: “Get Jack Reacher!” Not that the suspect, soon to detour into a coma, is fingering the hard case with no known address who knows all about a certain overseas sniper incident: Reacher (Cruise) appears out of nowhere in no time. Inquiry and injury ensue. Screenwriter and director Christopher McQuarrie (“The Usual Suspects,” “Way Of The Gun”) drops the local TV reporter from Child’s 2005 plot, but keeps the snappy dialogue. One wise-ass detail is a local business called Default Auto Parts Store. Dumber is Jack’s soliloquy on freedom in America. As an apology for lethal extra-legal justice, “Jack Reacher” joins a club that includes “Zero Dark Thirty” and “Django: Unchained.” With Rosamund Pike, Richard Jenkins, David Oyelowo, Robert Duvall and Werner Herzog as “The Zec.” 130m. (Bill  Stamets)