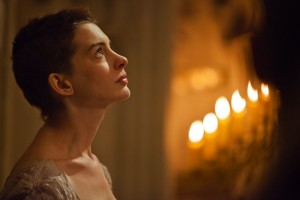 Quelle horreur! Tom Hooper’s barge-bloat adaptation of decades-running musical “Les Misérables,” an advanced seminar in formal misjudgment, runs a near-interminable 157 minutes, and it’s one of those rare so-bad-it’s-pitiful movies. Think of the classic photographs of film directors working with megaphones: Hooper’s megaphone is the size of the Hindenburg. Oh, the inanity. If you haven’t sung the score in the car and shower since you were small, this is not the hard-punching roadshow for you. The scale starts gargantuan and strives to become larger by the sung-through ferment of its close-ups of non-actors singing. (There’s almost no dialogue: this is operetta with a vengeance.) The worst decision by the director of “The King’s Speech” may be the abrupt, inscrutable cutting that looks as if the filmmakers were aping one-third of Terrence Malick, cameraman Emmanuel Lubezki and Steadicam operator Jörg Widmer’s “cube-izing” concept, which combines three disparate shots with moving camera into a montage, but using only a single angle. Or worse, that they’ve rented the equipment from Lars Von Trier’s 2006  “Boss of It All,” which was allegedly edited with a semi-random program called Automavision, “inviting chance in from the cold.” But, of course, the epic “Misérables” is instead a study in misguided intentionality, a clatter of close-in facial ictuses and epiglottal modern dance, set in a time when the tripod is yet unknown. Entire musical numbers are captured in extreme close-up with little or no cutting. Only Anne Hathaway’s murderously good, shatteringly thunderous wail as Fantine, a seven-or-eight-minute scene after a rape after losing her job after losing her child, has the emotional scaffolding to bear the weight that apprentice locomotive engineer Hooper has studied for. Hooper wishes she were his Falconetti (“The Passion of Joan of Arc”), and Hathaway’s peyote-black pupils in full sufferance suggest the simplicity of the suffering female figure at the center of Alain Cavalier’s restrained yet also long-suffering “Thérèse” (1986), but that is only a dashed hope. Jesus said, suffer the children, but not necessarily the picturesque. All else? Stuporous cannonade, bluster and fluster, and picturesque filth that surely has its own high end and diffusion makeup lines for the holidays. (“Oooh, you’re an ash, too, just like Fantine!”) There’s no splendor in unceasing grandiloquence, a roar that remains a roar until it is only a flat, sullen ocean of voluminous insignificance. With Hugh Jackman, Russell Crowe, Amanda Seyfried, Samantha Barks, Eddie Redmayne, and from a lesser, worse, slapstick comedy, Sacha Baron Cohen and Helena Bonham Carter. Redmayne will rightfully be much liked after the current washes back to shore. 157m. (Ray Pride)