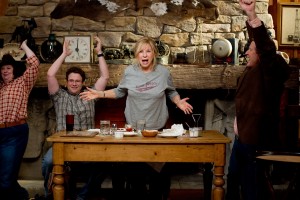 “The Guilt Trip” is a holiday comedy with a modicum of wit and grit, stock but not rote, as opposed to other current attractions like post-“Fockers” product “Parental Guidance,” which the presence of the abysmally oleaginous Billy Crystal was sufficient to keep me at a distance, despite the presence of attractive players like Bette Midler and Marisa Tomei. While Barbra Streisand’s dominating harridan figure is on paper forbidding—the stock caricature of the mother who can’t communicate because she can’t shut the fuck up—she dovetails nicely with the belligerent grumble of Seth Rogen as her deservedly failing entrepreneur son. While photographed delicately even while swaddled in a collegiate sweatshirt, never resembling the Picasso sculpture in downtown Chicago, the seventy-year-old Streisand is splendid, from her trouper’s timing to essential charisma, to the point of the audience wanting to hug her or even to fantasizing about having been Elliott Gould in another time. “The Guilt Trip”? Serviceable nosh brought to the table by two pros of two distant Jewish generations. Directed by Anne Fletcher (“The Proposal,” “Step Up”). With Kathy Najimy, Miriam Margolyes. 95m. (Ray Pride)