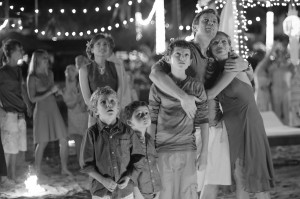 J. A. Bayona’s second feature, “The Impossible,” attempts something very much like that, recreating the experiences of one family separated in the 2004 Indian Ocean tsunami while vacationing in Thailand. (Plot details follow.) From its first seconds, with wash of ominous sounds under a black, blank screen, the craft is both compelling and queasy-making: how many tears would it take to wash away the crushing wall of water and its lingering repercussions? Based on the experiences of a Spanish family, and starring Naomi Watts and Ewan McGregor, “The Impossible” recreates the events with exacting choreography. Talking to Bayona in October, he told me that some scenes had even been shot in the since-reopened resort that the waves had smashed into, that Watts stood in the pool in the precise place where the actual figure had stood when the deadly force flattened the world. This, of course, is augmented by and intercut with many practical effects and SFX and reduced-scale but still horrific waves. The nagging concern of exploitation for tear-wringing remains throughout, especially in some scenes involving their young son (a game Tom Holland) on his own, yet Bayona’s acute sense of space and place (also in evidence in his first feature, the horror film “The Orphanage,” 2007) carry the day: the weight, even the freight, of the storytelling, is carried as much by adroit cinematic strokes as by his actors’ rapt, wrought, mud- and tear-streaked features. At the end of the film, the characters survive—no spoiler, as you know they must—and are being taken back to their civilization. As the small ambulance plane pivots on the runway, a shaft of clean, bright light plays across each of the characters’ faces in turn, at first seeming to anoint them as blessed for their survival, but instead opens up the narrative to the future we won’t witness. As the door jars shut and the plane rackets to life, elements of the tsunami’s complex aural assault are blended in, Bayona confirmed. The disaster has made them silent. “And only now the main title,” he told me. “They are alive, life goes on, this is the true ‘impossible.'” 114m. (Ray Pride)