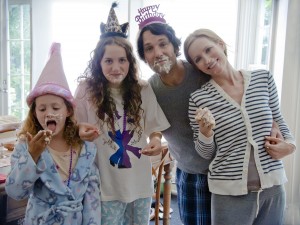 The Apatows, minus Judd, plus Rudd.

How can you tell the line between fact and fiction in Judd Apatow’s “This is 40”? Its teenager characters go online and search for things with Bing. But the forty-five-year-old writer-producer-director does muss things a bit in the reality department, depicting a privileged clan composed of his wife, Leslie Mann, and his daughters Maude and Iris Apatow, facing a tumultuous week as parents Pete (Paul Rudd) and Debbie face any number of plot complications that only just begin with them both turning zero-dark-forty and moving across their respective careers, as failing record-label owner and failing fashion-boutique keeper. Scenes across the 134-minute panoply are structured with quintessential sitcom skill, functioning as self-contained narratives of their own small scale, with neat or often-filthy buttons and bows tying them off. Is middle age that momentous or merely the freedom to fixate upon it? In any case, panic ensues, to intermittent comic result. Debbie’s dad is played as a cold, priss-mouthed surgeon by John Lithgow and Pete’s as a skilled mooch and wheedler by Albert Brooks: as in many of the complications and implications, the movie could spiral fruitfully off into any given pairing with improvisational zest. The placement of “Dull Tool,” an original song by Fiona Apple, could be questioned, but its hard, staccato velocity feels anthemic to what seems like Apatow’s intentions: “You, You don’t kiss when you kiss/ You don’t fuck when you fuck/ You don’t say what you mean, you don’t talk not enough… You forgot the difference between equanimity and passivity/ You forgot you have to try, you have to try, you have to try.” Is that “This Is 40”? I think so. With Megan Fox, Charlyne Yi, Graham Parker, Annie Mumolo, Rob Smigel, Tatum O’Neal, Michael Ian Black, Lena Dunham, Ryan Adams, Billie Joe Armstrong and a much creepier than usual Jason Segel. Melissa McCarthy? See for yourself, in the film, and in the outtake during the end credits. 134m. (Ray Pride)