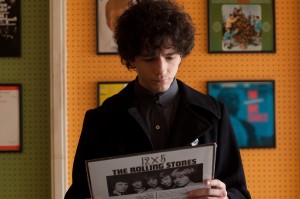 While New Jersey teen Douglas (John Magaro) plays in a band in high school in the 1960s, then heads to Los Angeles to study film, “it’s not an autobiography,” claims first-time feature writer-director David Chase (“The Sopranos”), who grew up in New Jersey, played in a band, and later trekked to California to study film. “I first learned my ideas about popular art then–like, oh that could be an art? You don’t have to paint the Sistine Chapel– you could play the guitar, or the drums, and that would be an art too,” Chase relates in the press notes to “Not Fade Away,” “because that’s what happened during this period– music went from pop music to what some people call ‘an art.'” (All of which sounds better than what makes it to the screen.) Chase mostly channels suburban middle-class angst and aspiration as holidays at the dinner table serve up corny “All in the Family”-style dust-ups about long hair, LSD, tampons, blacks, gays and Vietnam. Douglas rebels: his band is his “real family.” From the British Invasion, with an archival 1964 TV clip of Dean Martin mocking the Stones on “Hollywood Palace,” to a closing 1968 scene packed with RFK campaign posters, Chase checklists his decade. Late on a summer night near a Cinerama movie theater, an out-of-town hitchhiker turns down a ride offered by the likes of members of Charles Manson’s family. Back east, Douglas had seen “Blow-Up” by Michelangelo Antonioni, and complained to his girlfriend Grace (Bella Heathcote): “What kind of movie is this? Nothing happens. And there’s no orchestra to tell you how to feel.” What happens and what is felt in “Not Fade Away” is Chase’s historical take on music-making. On filmmaking, then or today, not so much. With James Gandolfini, Jack Huston, Will Brill, Brad Garrett, Christopher McDonald, Meg Guzulescu, Molly Price. 108m. (Bill Stamets)

“Not Fade Away” opens Friday.