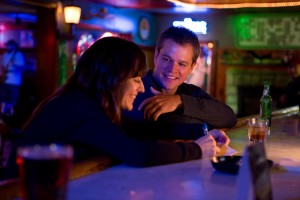 “Promised Land,” which was written by Matt Damon and John Krasinski from a story by Dave Eggers and meant to be Damon’s directorial debut, but was handed off to Gus Van Sant, is filled with the clean lines of advanced screenwriting seminars, with each running gag ticking in at the proper “beat” within prescribed “arcs.” A cautionary tale about the extraction, via hydraulic fracturing, or “fracking,” of natural gas from remote shale deposits beneath disadvantaged expanses of rural farmland, the movie moves from the picturesque to falsity with fleet and professional confidence. Damon plays Steve Butler, an about-to-be-promoted huckster for door-to-door misrepresentation of mineral lease rights to eager, distressed landowners on behalf of fictional corporation Global Crosspower Solutions. His patter is predicated on the promises that politicians once campaigned upon, not to win, not only to win, but also to make their communities thrive and grow together.

Frances McDormand elevates the role of Sue, his comedy-relief sidekick with her always-fantastic Frances McDormand chops. Steve can’t drive stick, and he’s a condescending prick, to boot. “Two hours outside of any city looks like Kentucky, you should know that,” is typical of the characterization in dialogue. Butler presents himself as the product of a failed farm, but he can spew like a viper. Do these landowners have a sense of pride? “Delusional self-mythology. It’s bullshit.” Steve slams at least eight shots in a scene where he blacks out drunk, and that’s the closest it seems he comes to self-realization, until the ending of “Sideways” is grafted onto the wreckage. “There is no neutral position. If you are against this, you are for coal and oil, period,” he sneers at a high school gymnasium filled with citizens and a basketball team anxiously waiting to practice for playoffs. Enter: Dustin Noble, one-man environmental activism combine, first glimpsed pumping his shiny be-logo’ed sea-foam-green pickup full of fossil fuel. (Noble, heh-heh. Noble.) “I think there’s an environmental presence,” Steve jargons. It’s a clever introduction, like the near-tautological word games throughout the film, including the slogan “Global go home.”

There is a nasty barb in this tale and to say it’s about “Astroturf” is not a dead giveaway. This darkling plot 180-degree turn suggests a 1970s Alan J. Pakula-style sensibility at first slap but then sinks into pure cynicism that says: don’t even try. Give up. Shut up. Give the fuck up. You will be beaten. You are not a good man. It’s deeply reactionary as well: false equivalency serves neither side, nor does it serve truthful drama. But the rain-damped countryside is so pretty! And Damon and Krasinski, until the plot curdles, 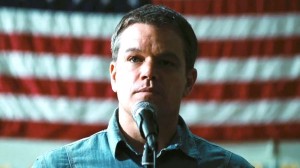 make entertaining adversaries and studies in middle-aged male self-assurance. (Damon is less convincing than his co-writer, as his character is called on to be an idiot at most every occasion.) To suggest that both multibillion-dollar energy conglomerates are equivalent to environmental groups is a different statement from, “Everyone uses fossil fuels,” and that undermines any and all character strokes and lyrical tit-bits from Van Sant, who’s damn smooth even on autopilot. It’s tidy. It’s precise. Measured. Multi-lawyered. Okay: Sincere. And: Dishonest. But the story lacks every moment of savagery this subject deserves. The subject is distant preamble to “Mad Max: Beyond Thunderdome.” “Promised Land” is our world as anecdote, not drama. You could think back to the poisoned water of Ibsen’s “An Enemy of the People,” or for an assertive, acerbic, provocative contemporary perspective, check out Josh Fox’s confrontational advocacy documentary, “Gasland,” from which Eggers, Damon and Krasinski have inhaled long draughts. The casting elevates the proceedings, including the fantastically wry Titus Welliver, the effortlessly empathetic Rosemarie DeWitt, as well her dashing dimples. With Hal Holbrook, Scoot McNairy. Produced by Participant Media (“An Inconvenient Truth,” “The Cove,” “The Beaver”) and Image Nation Abu Dhabi. 106m. (Ray Pride)