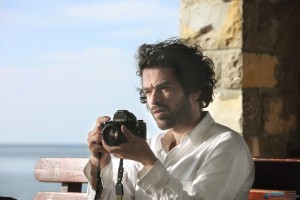 (L’homme qui voulait vivre sa vie, or, “The Man Who Wanted to Live His Life”) Eric Lartigau’s French thriller “The Big Picture” tempts the fates in its adaptation of a Connecticut-set 1997 novel by U. S. writer Douglas Kennedy in evoking better-known names in intrigue and mystery: if a rash act can give you the chance of a better life, will you spoil that one, too? But does swapping crimes with someone else increase the chances of success? (As in “Strangers on a Train”: exit Alfred Hitchcock and Patricia Highsmith, pursued by a Bruno; or, enter Michelangelo Antonioni, just a passenger.) Paul, a junior partner in a Parisian law firm, dislikes his career, wishing he had become a photojournalist instead. Beautiful wife (Marina Foïs), beautiful children, Catherine Deneuve for a boss, what’s not to like? Ah, unhappiness is everywhere if you know where to look. Paul is played by gleaming-eyed Gallic mop-top of our era Romain Duris, or, tightly coiled feral hottie, depending upon your predilection. Chabrol would have liked the setting and the setup—which I’m skimping on not to spoil surprises—plus Duris indicates readiness to burst from his suits with each shake of his head. A chance scuffle with a rival, whom he believes is having an affair with his wife and who happens to be a photographer, leads him down the road to death and rebirth, from Paris to Brittany and Montenegro. Producer EuropaCorp’s expected standard of eye-pleasing production value is in evidence. Lartigau and Duris excel at capturing the character’s obsessive behaviors and battles from within as well as without, glossing over all manner of implausibility in the complexities that unfold. Plus, extremely pretty people in extremely picturesque settings. Still, it’s always only a matter of time before someone says, “I Googled you.” Satisfyingly, the ending is more cheeky than bleak. With the magisterially rumpled Niels Arestrup, Eric Ruf, Branka Katic. 114m. (Ray Pride)

“The Big Picture” opens Friday at the Music Box. A trailer, with lots of plot details, is below.