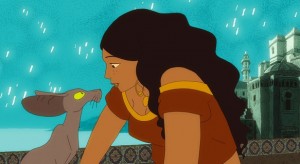 (Le chat du rabbin) One of twenty-one animated features that qualified for 2012 Academy Awards consideration, the witty, sporadically inspired hand-drawn fashioned “The Rabbi’s Cat” is discernibly more grown-up and less smart-ass than the general run in multiplexes. (Violence and sexual candor, for instance.) Based on a French comic, Joann Sfar and Antoine Delesvaux’s film also boasts a memorable, straightforward synopsis: “A rabbi’s cat learns to speak after he eats a parrot and asks to convert to Judaism.” Sfar is an established bande-dessinée artist, and this $16 million feature, set in 1920s Algiers, is based on three volumes of his comics series of the same name. (His first live-action feature was the bio-phantasm “Gainsbourg: Vie Heroique.”) The story seldom moves in a straight line and has a dose or three of whimsy despite its religious bent; an episode in which Tintin appears is among the odder of the oddities. Winner of France’s César Award for Best Animated Film. With the voices of François Morel, Maurice Bénichou, Hafsia Herzi, Mathieu Amalric, Jean-Pierre Kalfon, Fellag, Marguerite Abouet, Sava Lolov, Daniel Cohen. 100m. (Ray Pride)

“The Rabbi’s Cat” is now playing, through January 17 at Siskel. A trailer is below.