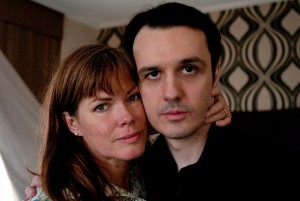 Damien Echols is a tall man, thirty-eight, shoulder-length black hair. Lines of black ink along his forearms, black boots up on a chair in the Peninsula hotel suite. Dark glasses. Nearly two decades spent largely in a small room, held on murder charges in Arkansas, no natural light, has weakened his eyes. Looks like one of a half-a-dozen bartenders you could find working in Chicago on any given night. No second glance.

He’s in town talking about “West of Memphis,” Amy Berg’s hefty documentary that weighs the crimes behind the accusations in the decades-long legal journey of the West Memphis Three, exploring new elements in a case that had already furnished three feature documentaries. Short of it: political venality, legal expediency. Long of it: the three no-longer-young men who had been accused of terrible child murders are off death row. Berg had the advantage of producer Peter Jackson’s investment in investigators and analysis that most documentaries could not afford as well as the 35mm format and an ominous, simmering score by Nick Cave and Warren Ellis. It’s a brooding, overcast documentary, infuriating by turns, combustible at moments, and earns its 145-minute running time even after the three comprehensive “Paradise Lost” documentaries made by Joe Berlinger and Bruce Sinofsky.

Echols is an easygoing talker and his wife, Lorri Davis, whom he met while still imprisoned, is a redhead with a quick, big smile. (They’re credited as co-producers of the film.) Twenty-first-century entrepreneurs, a reader of this paper might guess, if you’d even think of taking a second glance. Of course, there was no chance, once out of jail, that Echols would walk the streets of Arkansas. Jackson had been their salvation another way once he was out. They chose a place neither of them had roots.

“Salem, Massachusetts,” Echols says. “We moved there about two months ago. Up until then, we were living in Manhattan. We finally just decided to get out. Y’know, it’s one of those things, there’s not much sense in paying $3,000 a month in rent in a place where you gotta turn sideways to walk through.”

But it wasn’t a case of overstimulation? Too of much everything? “No. It was actually… When we first got out, I mean, we didn’t have anywhere to go, I didn’t have a single penny in my pocket, I didn’t have an extra suit of clothes to change into. So Peter Jackson and [his wife and co-writer/co-producer on his films] Fran Walsh have an apartment in New York, they said, why don’t you go there, stay there until you get your feet up, till you can start to develop some way for yourself in the world. So we went there. Then one day it started raining and all this water started pouring in through the roof. This construction crew came in and said, we’re gonna have to tear the entire roof off this place so you’re gonna have to get out. Then we were actually going to have to start struggling, just to survive on a daily basis in New York. We’re just starting out. I’ve only been out for a year. We don’t have the money for something like that. So we thought, let’s go to Salem, which, really, if I had to live anywhere in the world outside of New York City, that’s the place. I love it there.”

Are there relatives, a reason? “No. It’s one of those things where, the history of the place, all the persecutions and so on—” Obviously, that is what pops into your head when you hear that. “Of course. And it really has had a very deep and lasting impact on that place. Even to this day. They learned from their mistakes back then. So they’re not eager to do the same thing twice.”

So it’s a community steeped in tolerance. “That’s exactly what it is. That’s made it a Mecca for anybody that practices any form of alternative spirituality. We can walk one street over from our house and get acupuncture or reiki. If you want a tarot card reading, whatever it is. It’s nothing out of the ordinary. A friend of ours was joking, he said, a place like West Memphis, I walk down the street and people think, look at that freak. I walk down the street in Salem, people just assume I’m another businessman on his way home. I was eighteen when I went in and I spent eighteen years in, so literally half my life. It’s hard to describe, about the surprise, the things that catch you by surprise… As soon as I got out, we immediately went to New York and I’m walking around on the streets there and I’m thinking, oh my god, the world is completely different from when I went into prison almost twenty years ago, attitudes and expectations and the way people treat each other and the way people look at things. Everything is completely different now! And then we went back to visit Lorri’s family in West Virginia for Christmas and we went to see their kids play in their high-school basketball game, and I’m looking at that community and then I had this epiphany: nothing has changed. Nothing at all. Once you get back into that Middle American mindset, I would look around and see, these are the exact same people who were lining up to murder me almost twenty years ago. That kind of caught me by surprise; I went from one extreme to the other.”

Is there anything positive about that epiphany? “It told me where the hell to stay away from! That’s positive!” He and Lorri laugh. “It made me realize just the difference in people. A place like New York, Philadelphia, Chicago, just how different people are from places like Arkansas. Just when I was growing up and hadn’t experienced places, I wouldn’t’ve thought it was that different. The people would be basically the same? But they’re not. They’re not the same.”

“West of Memphis” opens at the Music Box January 18.