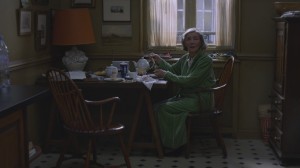 There’s a wonderful symmetry to Leonard Cohen’s song, “Dance Me To the End of Love” and Michel Haneke’s apocalyptic miniature, “Amour.” Haneke whittles the same wood, but much nearer the grave. “Dance me to the end of love,” sang Cohen, “Dance me to your beauty with a burning violin/ dance me through the panic ’til I’m gathered safely in/ Lift me like an olive branch and be my homeward dove/ Dance me to the end of love.” “Amour” is even simpler than those lyrics: Georges (the eighty-two-year-old Jean-Louis Trintignant, “Z,” “The Conformist,” “Three Colors: Red”) and Anne (Emmanuelle Riva, eighty-five, “Hiroshima mon amour,” “Léon Morin, Priest”) are a Parisian couple in their eighties, both retired music teachers. Their daughter (Isabelle Huppert), also a musician, lives in England. One day, at breakfast, Anne blanks. Haneke’s stage direction in the screenplay for this first sign of deterioration and oncoming dementia is a blunt chill: “She stares into the void.” Does a couple ever truly have the privilege of dealing with inevitable circumstances like these together? Is there a point where it becomes the responsibility of the one who is less infirm to deal with matters? I suppose it’s a compliment that so many people I know who’ve seen “Amour” say it’s the sort of great film they never, ever will see again. Trintignant and Riva are splendid. Brave? Naked? No. Only great actors given a late, if not last opportunity to do clear-eyed work in roles seldom seen and who rise magnificently to the occasion. Haneke is after simplicity, it seems, not the chilly puzzles and games of his other movies like “Cache,” and he attains it. (Those longing for less easeful death can always return to the deadly venoms on the Ingmar Bergman shelf.) The digital photography by the great Darius Khondji (“Midnight in Paris,” “City of Lost Children”) has the precision to be expected from a Haneke film, but also a clarity of light that comes from the choice to shoot on a set, with the illumination that comes from any exterior window precisely calibrated to time of day, and more importantly, to the deteriorating mood of falling afternoons within the film’s single setting. Like the flesh, pride and dignity wither. The light goes. The effect is sublimely tender, touching, tragic. With Alexandre Tharaud, William Shimell. “Amour” is Austria’s submission for the Foreign Language Academy Award, but some Oscar pundits are placing heavy bets on Riva, or even “Amour” for a best film nomination. 127m. (Ray Pride) “Amour” opens Friday at Landmark Century. The last twenty seconds of the British trailer below shows Trintignant’s physical skill as an actor. [youtube http://www.youtube.com/watch?v=BCDa2ffdC-w?rel=0]