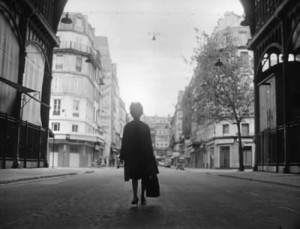 (Chronique d’un été) Even today, “Are you happy?” isn’t a question you expect to be asked by someone wielding a camera. Jean Rouch and Edgar Morin’s “Chronicle of a Summer” is a fascinating 1960 cinema vérité provocation, an experimental documentary using the latest, then-revolutionary 16mm synch sound technology to explore the streets of their lives, Paris in summer, as a site of ethnographic inquiry: their groundbreaking “ethno-fiction” still holds a rare immediacy. The subject shifts readily to politics, including the then-current Algerian War, to the opinions of factory workers, artists, an Italian émigré and an African student, and even the subjects themselves critiquing how they appeared on camera earlier in the film. And “We wanted to make a film about love… not necessarily a sympathetic one” is a pretty fantastic artists’ statement. Plus some of the most tremulous smoking I’ve ever seen on screen, even from a French woman. The current, 2011 restorations, from a 1961 35mm blow-up, aren’t photochemical, which lends modest pathos to Rouch’s 1998 comment on a Docfest panel with Albert Maysles and D.A. Pennebaker about cinéma-vérité filmmaking, “A film is a thing you can touch and smell. It’s a sort of love affair.” The cinematographers include Québécois filmmaker and early Direct Cinema advocate, Michel Brault and the eye of early Godard, Raoul Coutard. 90m. (Ray Pride)

“Chronicle of a Summer” plays Sunday and Wednesday at Siskel as part of the invaluable retrospective, “Jean Rouch: The Ethnographer As Auteur” that continues through the end of January.