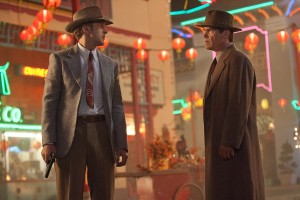 Warner Bros. Pictures revisits its signature genre with “Gangster Squad,” a retro crowd pleaser, set circa 1949. Chief of Police Parker (Nick Nolte) cannot take down gangster Mickey “I am progress” Cohen (Sean Penn) because the mayor, the D.A., a judge and too many men in blue have been bought off. So Parker dispatches an “off-the-books” squad of hand-picked cops to break any laws they need to bust up the businesses run by Cohen’s ever-growing mobster conglomerate. Out of uniform, the good guys inflict police brutality on better-dressed bad guys for the greater good of Los Angeles. Sgt. John O’Mara (Josh Brolin) heads the squad, with Jerry Wooters (Ryan Gosling) as a canny sidekick who’s bedding Cohen’s squeeze and etiquette tutor, Grace Faraday (Emma Stone). Newspaperman Paul Lieberman did two decades of legwork on the real-life Gangster Squad that former LAPD detective Will Beall, assigned to the same division where the squad formed, turned into a pulpy screenplay that opens and closes with O’Mara’s cornball voiceover about the “will to power” and “triumph of evil” in “paradise.” Although the patter can crackle, there is one contemporizing touch that misfires. Resurrecting the signage for the long-demolished Garden of Allah Apartments on Sunset Boulevard where F. Scott Fitzgerald once lived would be an innocent touch, if it weren’t for red meat dialogue about WW II vets returning to civilian life to fight a homefront “guerilla war” against an “enemy occupation” by Cohen and other East Coast and Chicago crooks who are “invading” the City of Angels. Ruben Fleischer (“Zombieland”) directs a glamorous pastiche of nods to an era when True Detective was customary reading. With Robert Patrick, Michael Peña, Giovanni Ribisi, Anthony Mackie, Mireille Enos. 113m. (Bill Stamets)