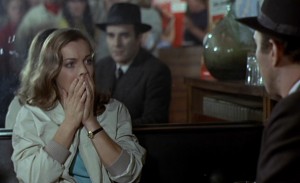 (Max and the Junkmen) Claude Sautet’s 1971 heist caper “Max et les Ferrailleurs” is as much eye candy as suspense film. Michel Piccoli is a tightly coiled lone-wolf cop who conspires to entrap a crew of fourth-rate thieves, hoping to convince to rob a bank so he can make a bust; romantic intrigue comes when he meets a prostitute, Lily (a resplendent, suggestive Romy Schneider) who offers entrée to the gang. While overlit to modern eyes, Sautet works with a clammy, grainy gray-to-green interior palette suggestive of the more stylized interiors of late Melville and Bresson. (Or the perfected trenchcoat man, Alain Delon, in Melville’s “Le Samouraï.”) The characters’ costumes suit the archetypes of the gangsters and undercover policemen, starting with dirty flic Max’s trim jackets with crisp, wide lapels and his perfectly-fitted fedora, and continuing with Lily’s louche, scoop-cut mauve dress and blue eye shadow as she reclines divinely on a raspberry-sherbet plush coverlet, finely fingering her cigarette or, later, another cleavage-baring costume that includes a black vinyl overcoat. Tailoring is destiny. A playful bathtub scene involving a camera and a hat in danger of dousing gently reminds of similar scenes in Godard’s “Contempt,” in which Piccoli played a different sort of inwardly driven hat man. The script is less detailed than the fabric and felt. The drab mood, duplicitous behavior and deeply downbeat story fit nicely with other movies of the time, such as “Dirty Harry” and “The French Connection,” but until the current 35mm restoration with updated subtitles, “Max” hadn’t been distributed in the U.S. The boink-sterous score is by Philippe Sarde.  The great Bertrand Tavernier stakes his career to the early help of Sautet, and writes of his mentor, “Sautet was the greatest script doctor and fix-it editor in French cinema. Everyone, including Truffaut, consulted him, and his reactions were always stimulating. He would instantly put his finger on what wasn’t working and immediately find a solution. He improved, repaired, patched up a very large number of French films and saved several from disaster. Jean Gabin often called him because “the screenplay needed a dessert”—a very good image. “And Sautet invented all kinds of desserts.” Plus smoking. Plus drinking. And smoking. Oh, the smoking. 112m. (Ray Pride)

“Max et les Ferrailleurs” opens Friday at Siskel. The 1971 trailer below is very much of its moment.