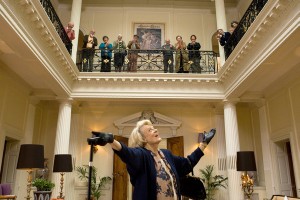 In the late 1970s, Dustin Hoffman fired himself as director of “Straight Time,” handing the crime drama to his friend Ulu Grosbard. In the decades since, he’s taken one extended break from work, but in more recent years has been a fine, welcome face even in less-than-classic films. But it’s taken him until the age of seventy-five to return to directorial ambitions, and the randy geriatric comedy of artistic collaboration, “Quartet,” is the less-than-classic yet still entertaining result. Call it “Best Exotic Retirement Village.” The story of an opera company reuniting in late age for a benefit has been advertised in some places as a film starring Dame Maggie Smith, coincidental with the popularity of “Downton Abbey,” but also fitting her never-less-than august disdain. Even sitting still, she’s regal enough for four. Everyone in the cast is game, and the near-plotless telling is largely fun, except in brief moments like Tom Courtenay trying to pull off a moment where he compares the emotions of opera to rap. Likable, professional, “Quartet” also has its small share of vulgar laughs, which, if you’ve ever heard Hoffman talk or read interviews, you would know would be a sore oversight in anything with his name attached to it. (Billy Connolly excels at this elder randiness.) Ronald Harwood adapts from his own play. With Michael Gambon, Pauline Collins. 95m. (Ray Pride)