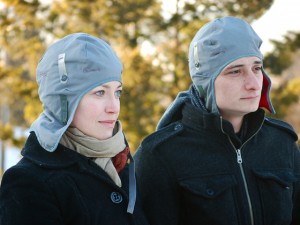 Chicago filmmaker Frank V. Ross’ “Tiger Tail In Blue,” which hasn’t made the festival circuit, is his sixth feature. While it’s a shame the Downers Grove resident hasn’t gotten more attention for his work, the keenly observant “Tiger Tail,” demonstrates well the gently idiosyncratic voice heard in earlier films like “Audrey the Trainwreck” (2010). It’s an earnest depiction of drifting young married life, telling the story of Christopher (Ross) and  Melody (Rebecca Spence), their schedule-juggling lives. He’s writing a first novel and working as a waiter, where he’s distracted by a co-worker, Brandy (Megan Mercier). Unlike many microbudget filmmakers, like Chicagos’s Joe Swanberg, he works from script, not improv. He’s got a lot more work in front of him, I hope, at which point that voice will be ready to pin down. For now, a Midwestern rare flower has already bloomed. Even tossed-off lines, “I’ve been thinking of Doritos for like an hour,” have the acid tang of recorded life, rather than micro-budgeted mini-drama about nothing at all. (“Tiger Tail” was one of the five nominees for the 2012 Gotham Awards’ “Best Picture Not Playing at a Theater Near You,” for which I was a juror.) 76m. (Ray Pride)

“Tiger Tail In Blue” plays Saturday and Wednesday at Siskel. Ross will appear.