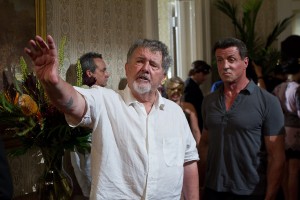 A few seconds into “Bullet To The Head,” Walter Hill’s first theatrical feature in over a decade, associations chime with earlier work: a train crossing tracks in a rail yard immediately evokes the subway schema of “The Warriors.” And then: poof, we’re back to a grumble of a simulacrum of a 1980s action movie. Still, the credit “A Walter Hill Film” promises much to those who’ve followed the fine writer-director’s career since his early, pared-down movies in the mid-1970s, as much Robert Bresson as Raoul Walsh. The bare-knuckle fighting of his debut, “Hard Times,” tickles under a couple of brutal room-wreckers of man-on-man fighting. An unlikely battle with fire axes evokes a sledgehammer ballet in “Streets of Fire” before a tossed-off “What are we, fucking Vikings?” throws the moment away. Sylvester Stallone, playing a twilight-years professional assassin in New Orleans, pronounces both those “G”s as hard as he can, consonants to the eardrum. At the age of sixty-six, atop a gnarled mass of torso tautly cosseted in a shantung silk suit, Stallone’s face is a sentient slab of putty you could press new shapes into with your thumbs. He’s as banty as Dolly Parton is bosomy, a compacted, melty Rambo action figure one bludgeon away from traction.

In a few recent interviews as gloriously clear-headed as the best of his movies (“The Driver,” “Southern Comfort”), the irrepressibly bright and understated Hill says the production was cheap and fast (although its release has been months-delayed). But as a director, he’s always been good with the sparse, slightly damp alleyway and the medium-close shot of an actor looking off to one side against an unadorned wall or building. (Inexpensive; sleek.) There’s much of 1980s action-film vocabulary in the mix, with the intervention of contemporary speed-ups and freeze-frames and superimposed low-yield flares to accelerate the cutting, as well as the intermittent snap zoom. Plus: ridiculously crunchy fight scenes, each shot as full of sound and blurry as a dozen shots from any other pretender. But a story would have been nice. 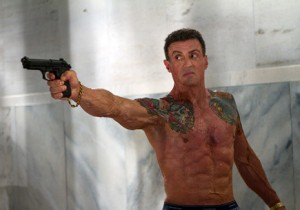 While the bullets of the title and the guns on the poster seem to promise violent overkill, “Bullet To The Head” is as much blood do-si-do as blood ballet. There’s more gruesomeness in the sound of a bone saw grinding down as Bobo approaches a corpse on a morgue table as its torso is butterflyed or any of Bobo’s unsentimental offings, where pallid pink blood mist is choreographed to shell-casing clank.

Stallone’s James Bonomo, or “Bobo,” gets buddy-teamed with a Korean-American cop, Taylor Kwon (Sung Kang, “Fast Five”), but “48 HRS.”-style chemistry does not arise; a succession of desultory racial gibes have the weariness of a tattered checklist. “Bullet To The Head” was shot so long ago, the cop’s got a BlackBerry and he brandishes it like a magic talisman. “You one of those phone guys?” Bobo asks. (Bobo has a dealer-style burner of a phone with an extendable antenna.) Kwon’s remedial detective work on his Personal Digital Assistant is as groansome as his fits of confessional logorrhea. But most of the dialogue is along the pulpy lines of “I got no problem with cats. I got a problem with dander.” The best, though, sound like prototypical Hill feints and shrugs: “It’s easy to get sentimental about things”; “You had me at ‘Fuck. You.’,” and the closing line, which one hopes is not the last line of a final feature by Hill, “After all, you don’t live forever.” Still, it’s close enough to the bittersweet science of flinty jabber raised to simple, base wit, like the pop of a fist. “Mr. Keegan fancies himself a hero,” Bobo’s told. Hardly without moving, hardly without breathing, Stallone says, “Well, guess what: in classical literature, the hero dies.” After all? You don’t live forever. With Christian Slater, Jason Momoa, Jon Seda, Adewale Akinnuoye-Agbaje, Sarah Shahi and a couple bottles of Bulleit bourbon. 91m. Widescreen. (Ray Pride)

“Bullet to the Head” is now playing.