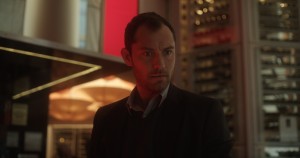 Clever extrapolations can be made that almost any movie is a reflection of the means of its making.

Or, in the case of “Side Effects,” the moment of Steven Soderbergh, asserting that at the age of fifty, he’s done with feature-length “cinema,” and will move on to painting, longform, television and other yet-to-be-discovered venues for his intelligence and prodigious energy.

A tricky, sardonic thriller shot after the fashion of Adrian Lyne’s sexual-remorse thrillers like “Fatal Attraction” and “Unfaithful,” “Side Effects” is a revival of a script by Scott Z. Burns (“Contagion,” “The Informant!”) that Soderbergh took up after a “Man From U. N. C. L. E.” revival collapsed. A psychiatrist, Dr. Jonathan Banks (Jude Law), is assigned a patient who’s apparently tried to harm herself, Emily Taylor (Rooney Mara) after the release of her husband (Channing Tatum) from prison after four years on insider-trading charges. A succession of drugs (all with real names) doesn’t help, until a new (fictional) one seems to: Ablixa. But the thrills (and an ample aptitude for suspension of disbelief) come from questions of culpability and being wronged, rather than the pharma folderol.

Twenty-six features and, for years, he’s been his own camera operator, cinematographer (“Peter Andrews”) and editor (“Mary Ann Bernard”).  To argue that any movie is a reflection of its process is reductionist, yes, but in the case of Soderbergh’s recent exit interviews—bold yet affirmative, sometimes even strident—”Side Effects” is a well of perhaps inadvertent self-reflection, down to the smallest details.

“I just don’t think movies matter as much anymore, culturally,” Soderbergh says. And one of his characters says, “There’s a reason we have rules,” and another, “I remember that structure really helps with hopelessness.” And a paranoiac statement that everyone knows everything is also a clever inversion of William Goldman’s iconic statement about Hollywood: “Nobody knows anything.”

But Soderbergh knows how to make a sleek thriller, and such keen professionalism would be missed, from the film’s bookends and fine cynicism as chilly as the ending of “Contagion,” to its prismatic, centripetal play with who the central character really is. (Preview screenings around the country were affixed with a sign, “The screening has now started. Due to the non-linear nature of this film, it would be unrewarding for you to enter at this point… Best regards, The Filmmakers.”)

The screenplay is rich with dovetailing and rhymes. One small stirring comes from Emily’s fingers whirring at a patch of white fray on a hospital coverlet, a detail matched later to the airy weave of the model’s white cable-knit sweater in a commercial for Ablixa.) Complicated convolutions impress with cleverness but not the highest degree of plausibility. The cautious withholding of important information is key to its reversals, an alchemical cocktail with a few drugs missing. But the sweetly percolating tension in Thomas Newman’s score, along with the precision of physical characterization and adroit editing bundle things along. Still, climaxes and anti-climaxes spatter like cold rainfall. (This is not a warm movie.)

Soderbergh’s career-long, emblematic foot fetishism also steps forward, with Rooney’s shoes choreographed to her character’s fashion moodiness and motivational ambiguity, including red flats as she drives carelessly, to black flats in another mood as she makes a show of herself on a subway platform. Then there is the screen nearly filled with Rooney’s upturned soles with the patina of a certain pink painted there. (The color red’s most forceful appearance may be the fantastic, emphatic high flush on her cheeks after an accident.) An almost-too-perfectly parsed description of how she and her husband met includes the very Soderbergh-esque refractions, “He stared at me like I was a painting,” as well as, “Time goes by so fast.”

The style of the film is comprised largely of medium close-up head-and-shoulders studies of the actors; a set of countershots between Law and Rooney in their first psychiatric session are in themselves gorgeous portraiture. A late scene amplifies this, when in reverse angles, first Rooney, then Law, are out of focus, then lean into the shallowest, most precise focus while laying out the terms of an understanding. The light ranges from porcelain to gray, a beautiful Manhattan Woody Allen would go wide eyes at, steering clear of the yellow furze of recent Soderbergh moves like “Magic Mike” and “The Informant!” Among the neatly delineated elements, Banks’ fastidious but slightly outdated way of dressing marks the doctor as out of his league, as does an office where the coffee table in his exam room lacks almost all character, except a stack of books crowned by Malcolm Gladwell’s bulletins of societal self-help, “Blink” and “Outliers.” The most evocative recurring ingredient, beyond the close-ups on Law’s now-weathered face and Mara’s endlessly complex eyes, may be in the production design: the walls behind characters in their offices and homes capture lonely figures and lonelier streets. The interior walls of the city, the inner life of their minds. The life of the mind: a frightening landscape all its own.