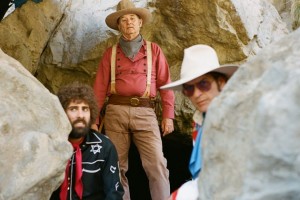 An ancient Hollywood putdown was that a certain brood of directors didn’t grow old, they just became interior decorators. (Since the figures in question often made women’s pictures, it may have been a slur against gay filmmakers.) Roman Coppola seems to have been born a production designer, and there are moments in his video work and his scripts with Wes Anderson (“The Darjeeling Limited,” the Oscar-nominated “Moonrise Kingdom”) and second-unit director for Anderson and his sister, Sofia Coppola (“Somewhere,” “Marie Antoinette”), that elevate potential kitsch and tchotchke to a shiny, polished goodness, moments and moods that bring the glassiest fantasy to life. His 2001 “CQ” was rich with ever-loving movie love, a fever dream of cinephilia that impressed his colleagues but not a larger audience in the real world at large. There are no piquant generalities for Coppola: while steeped in detail, “A Glimpse” may be about as much as what’s supposedly coming from its main characters’ mind as what the characters are doing. Coppola describes Charles Swan III (Charlie Sheen) as “an outlandish narcissist, a flamboyant lover of women, a bit of a bad boy.” Coppola indulges a modestly ironic perspective on artistic will and masculine ego, and it suffers most from a single, hollow failing: Coppola’s childhood buddy at its center. In the most Sheen-like role on show, Sheen’s hardly up to it, his broiling brain under a fedora, wreathed in swirls of cigarette smoke and self-regard. Around him swirls a 1970s film student’s most opulent phantasmagoria, rife with post-Fellini fantasias, retro typefaces from the deco era that were popular in the 1970s, women, women and womanizing, with intense, shiny design telling the inner life of a designer immersed in eras other than his own, shots at the sea and into mirrors, as well as the bold, lovingly lurid designs of artists like from an earlier era, often masters of the airbrush, like Charles White III, Dave Willardson, Peter Palombi and Robert Miles Runyan. Revenge fantasies and rescue fantasies burble back and forth, “Inception” inside the world of 1970s art direction, a throwback fantasy to the Hollywood Renaissance era when directors like Francis Coppola were making their names (and great films). Maybe Roman Coppola won’t grow old, he’ll just become a contemporary filmmaker. Francis Ford Coppola’s original red-white-and-blue American Zoetrope logo, seen at the beginning, is always a treat; Coppola also employed the 1980s lenses his father used to shoot “Rumble Fish.” The sweet if off-kilter score is by Chicago’s own Liam Hayes. With Jason Schwartzman, Bill Murray, Patricia Arquette, Katheryn Winnick, Dermot Mulroney, Richard Edson, Stephen Dorff, Colleen Camp, Angela Lindvall, Aubrey Plaza, Mary Elizabeth Winstead. 85m. (Ray Pride)

“A Glimpse Inside the Mind of Charles Swan III” is now playing at 600 North Michigan.