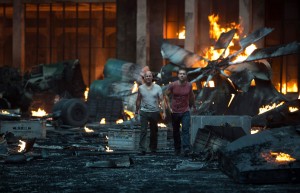 Yippee-ki-meh. “A Good Day to Die Hard,” the generic fourth sequel to 1988’s “Die Hard” offends largely in proportion to its immediately demonstrated inability to give the slightest fuck about its audience. (I wanted to walk out after about twenty minutes to take up smoking.) Rather than building on the genuine good will Bruce Willis has elicited from the greater proportion of his career, this nonsensical programmer spends much of its tripod-averse ninety minutes on Moscow-set traffic chases (shot within a hazily defined Hungarian topography) on the scale of a “Transformers” movie, with wreckage careering while John McClane makes family banter on a cell phone from behind the wheel. Physically the action scenes are a spatially unfathomable mix of faux handheld footage, often shot with long lenses and splattered with smash zooms. We’ve come a long way from Nakatomi Plaza.

John McClane’s dropped into Moscow to find his heretofore unseen son (Aussie Jai Courtney), who’s gone silent to he and his mom, and he walks, conveniently enough, smack-dab into the U.S. spy-sponsored kidnapping of a political prisoner. It’s nonsense about a government-connected politician and a fallen, imprisoned oligarch (Sebastian Koch) fighting over state secrets, with our gray-haired and bushy-bearded supposed turncoat, the world’s least-interesting riff on Dos Equis “Most Interesting Man in the World.” Sadly, there’s a wealth of gangster filth and targeted murders and mass public slayings to draw from Russia’s post-Soviet history, and even John McClane springing Pussy Riot from the Gulag would show a twinkle of wit.

Timur Bekmambetov’s 2009 kids’ production, “Black Lightning,” a bumptious mix of “Back to the Future” and “Spider-Man” about a teenager and the Soviet-era car his father gave him that just happens to fly above modern Moscow traffic, has more skill and wit than any dozen flying CGI splinters of “Die Hard Already.” “A Good Day To Die Hard” is content, in an arsenic-bleak counterfactual, to present the nuclear meltdown at Chernobyl as a heist gone wrong. (Plus McClane and his son take a rainy-day drive from Moscow to Chernobyl that takes but moments, instead of nearly a thousand miles and the inconvenient fact that Russia and Ukraine are separate countries.) They have to find a file. Paper file that could never be copied? Digital file that would never be backed up? Are all movie files in virgin and Impregnable form? Who knows? Not the screenwriters, nor director John Moore (“The Omen,” 2006; “Max Payne,” 2008) although the shabby, ribs-bruising score by Marco Beltrami offers montage-hopping volume. Moore’s characteristic Chekhovian pauses and hesitations have been whittled down to nothing.

Willis does good just by showing up. Contemporary digital photography doesn’t hide the character of anyone’s features. The gentle ample crenellations striping Willis’ face, particularly around his eyes and forehead, comprise a hydro-agronomist’s dream landscape: how will I irrigate these arid features? Weirdly, McClane is allowed to sound weary instead of jaded. He might as well be saying, “Do you have the business section,” when he tells his beefy boy, “Let’s go kill some motherfuckers.” (The most sincere-sounding line reading from Willis comes with “When’s it not about money?”)

Mary Elizabeth Winstead (“Smashed”) gets a couple of thankless, wide-eyed moments as McClane’s daughter, who passes along a simpleton travel guide to Moscow to her father, with a cover that promises, “With New Routs!” Typo or smug pun? Yeah, right.

Inside the set representing the entombed nuclear power plant, a decades-sealed pool of water is covered with recently dead leaves. It looks like they’ve wandered into a cheapjack version of “the zone” in a Tarkovsky film. “What does this remind you of?” his John McClane, Jr. asks. I grumble, “Stalker?”  Nope. The answer is “Newark.” 98m. (Ray Pride)

“A Good Day To Die Hard” is now playing.