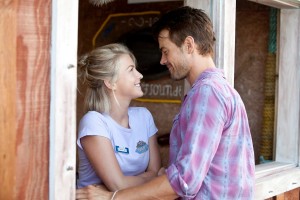 More checklist than chick flick, the seventh screen adaptation of a Nicholas Sparks novel delivers what his readers must love to watch: a good-looking couple that falls in love in a scenic coastal town. Precious handwritten letters are plot fixtures, sometimes read as voiceovers in teary endings with helicopter shots of a bay in golden hues. In “Safe Haven,” as in last year’s “The Lucky One,” a mean man in law enforcement puts a romance in peril. Third-act flames will threaten a little girl at night, rather like nighttime floodwaters threatening a little boy in “The Lucky One.” There the female lead first appeared in a snapshot. In “Safe Haven,”  a sketch of her counterpart will appear in a “wanted” flyer. Katie (Julianne Hough) runs from a crime scene. Rushing through the Boston bus station, she fakes pregnancy by stuffing a pillow case of her belongings under a grey hoodie that hides her face and newly cut and dyed hair. During a stop in a cute little town in North Carolina, she gets off. Alex (Josh Duhamel) runs the local grocery store with his crusty uncle and adorable daughter. His obnoxious son is not dealing well with his mom’s death from cancer. Katie and Alex are a colorless item, although she has shadows in bad flashbacks to her past up the coast. A detective with issues is on her trail. She rents a shabby cabin in the woods, where her only neighbor, Jo (Cobie Smulders), comes on strong, almost as if cruising the newcomer with no last name, and then disappears, only to disappear once more at the end on a day she calls “incandescent.” Sparks typically includes a little melodramatic menace, but the thriller and supernatural touches this time tilt toward day-time soap. Lasse Hallström, who also directed 2010’s Sparks adaptation “Dear John,” and screenwriters Leslie Bohem and Dana Stevens do what is expected for a Valentine’s Day release. Some Sparks fans may be let down, others less so. Alex almost never takes off his shirt. Katie only wears tight cut-offs. With David Lyons, Noah Lomax, Mimi Kirkland. 115m. (Bill Stamets)
“Safe Haven” opens Friday.
Ray Pride