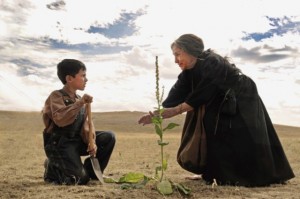 “Why is there evil in the world?” asks the narrator. “Let me start at the beginning.” Set in 1944 in New Mexico, “Bless Me, Ultima” began in 1972 as the first novel of Rudolfo Anaya, now an emeritus prof at University of New Mexico who is known for regionalist writings such as “ChupaCabra and the Roswell UFO.” With sincerity and sentimentality, Carl Franklin adapts and directs with no trace of the Arkansas noir found in his 1992 breakthrough “One False Move.” Six year-old Antonio Marez (Luke Ganalon) faces the first grade and his first communion under the spiritual tutelage of Ultima (Miriam Colon), an aging curandera taken in by Antonio’s parents. This wise herbalist and healer can deliver babies and reverse curses. She guides the kind and curious Antonio as he deals with the dualities of his world: farmers on his mother’s side of the family versus vaqueros on his father’s side, the taco his mother packs for his first day at school versus the white bread sandwiches of his Anglo classmates, and the conflict between teachings of the local priest and Ultima. As for evil, that is manifested by Ultima’s nemesis, the father of three witches, who guns for a holy owl. “Bless Me, Ultima” is an unremarkable memoir with local color and new age uplift. With Dolores Heredia, Benito Martinez, Castulo Guerra, Joaquin Cosio. 102m. (Bill Stamets)