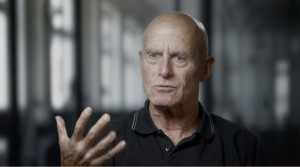 Leon Panetta, Porter Goss, George H. W. Bush and David Petraeus walk into a bar… The Wild Bill Donovan Saloon and Grill… or better yet, a television studio… Let’s say one with Bill Moyers behind the camera. Bill Moyers and Rachel Maddow. And Dick Cheney drops in late in the day for a little extracurricular jawing and banter.

And then these men, these public servants, proceed to answer any and every question of their well-informed interview, nay, to volunteer narratives and motivations and self-justifications and self-critiques. Pretty unthinkable for the past Directors of Central Intelligence of the United States of America. Almost as unthinkable, as the current crop of Republican Senators opposing the nomination of former Republican Senator Chuck Hagel to be President Obama’s next Secretary of Defense, is any form of sustained or even lucid debate about the United States and Israel and daily affairs in the Middle East. The powers of Senators McCain, Feinstein and Levin marshaled in an attempt to intimidate Sony Pictures, Columbia Pictures and the filmmakers of “Zero Dark Thirty” are yet another force that hopes to be reckoned with, but all go wooooosh in the wake of “The Gatekeepers” (Shomer Sef), Dror Moreh’s Oscar-nominated masterpiece of urgency that’s largely a talking-heads marathon with six surviving spymasters—Avraham Shalom, Yaakov Peri, Carmi Gillon, Ami Ayalon, Avi Dichter and Yuval Diskin—who have been head of Israel’s counterterrorism group, Shin Bet, as they describe and discuss the decisions they made that affected both Palestinian and Jews in the Middle East. (“Shin Bet” has been translated as “defender that shall not be seen.”)

Of course, with any great talking-heads documentary, it’s what the heads are talking about. And the fact they’re willing to talk at such length! Sometimes it’s a matter of casting, but here, it’s a case of history. And the good fortune that each figure has a different way of carrying himself, a different opinion of the necessity of the work Israel has done, and, almost comically, a disparate body type. But the subject is serious: Israel vs. Palestine vs. Israel vs. Palestine vs. Israel unto the horizon. And tactics. And strategy. But as “The Gatekeepers” unfolds, the question of cost accrues.

More controversially, Moreh also deals in a latter-day style of nonfiction filmmaking, mixing judicious and scrupulous use of archive footage with another kind of imagery, extensive re-creations of Shin Bet activities, scored to an ominous, melancholy soundtrack.

Simply, I cannot fathom how an American parallel to this shattering, forthright documentary could, would never be made. The brute candor and the clear-headedness of the very specific criticism from these aging men are bracing, even if one’s skepticism must tingle throughout. Even Errol Morris’ often-maligned “Standard Operating Procedure” stayed low to the ground with its testimony from lower-level figures in the Abu Ghraib case. But these men weren’t observers of the violent activities and counter-activities: they were the bosses, the planners, the remorseless devisers of surveillance, bombings and targeted assassinations.

Errol Morris has gone to the authoritarian well again, after his Robert McNamara tale, “Fog of War” with a work-in-progress about the “known knowns,” of forty years in the life of Donald Rumsfeld, but it’s hardly likely he’ll get that untamable hard-ass to be as piercing as any of the six Israelis on screen, given to pronouncements like “Find morals in terrorists first. In the war against terrorism, forget about morality.” Dick Cheney says his piece in an unfortunate upcoming Showtime documentary, but his language is all banality and braggadocio, immodest self-affirmations of an immodest man. Would Cheney or Rumsfeld ever describe an American action on camera the way one of the Shin Bet does of Israel’s army as “a brutal occupation force that is similar to the Germans in World War II”? No.

These men, analytical, speaking with authority, are witnesses to violence, but to whom are they testifying? History? Posterity? Their own mixed feelings of pride and regret? They all openly describe, concede, embrace the truth that cruelty persists. And that sometimes, often, they find it necessary for self-preservation: of a nation, of people, of ideals. Their words are stern, assured, largely dispassionate, yet every single passage stings, there’s no other word, with urgency. But can you unthink the speakable? War continues. These men of war despair, wondering aloud if they were unavoidably enemies of peace. And then? And then, a screaming comes across the sky.

“The Gatekeepers” opens Friday at Landmark Century and Renaissance. The US trailer is below, as well as an extract from the film. The ISA explains what it does at this link.