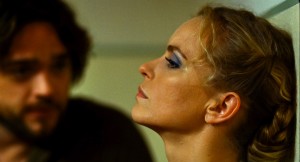 Tremendously exact filmmaker Christian Petzold’s latest vehicle for leading actress Nina Hoss is a fantastic study in the increments of human trust in a story of a pediatric surgeon distrusted by the paranoiac government of 1980 East Germany. The small town that “Barbara” has been exiled to is plain and made of falling stone and cardboard and Formica but bursting with green and summer sunlight. Petzold and Hoss have collaborated on movies like “Jerichow,” and “Yella,” but this may be their best work.

Petzold cites as influences the duplicity of the characters in Howard Hawks’ “To Have And Have Not” and Rainer Werner Fassbinder’s rundown “The Merchant of Four Seasons.” The cinephilic allegiances are apt, yet Petzold, a director of cool, specific and quietly dynamic frames, warms and tends to story and his actors here in a cumulatively devastating way. In a director’s statement, Petzold writes, “We wanted to capture on film that specific space between people, with everything that has built up, everything that had made them so mistrustful, everything they trust, reject and accept.” And while “Barbara” succeeds at this in its story and spaces, both cramped interiors and boundless winding country roads the characters bicycle along, he also makes magnificent work of how the characters watch each other, openly or tacitly, in instants of cooling or warming. Barbara makes a sophisticated decision in the closing instants of the movie, and the last three to five shots and respective cuts comprise as perfect an ending as you could want. Looks tell all. Respect is all, love is all. With Jasna Fritzi Bauer, Mark Waschke, Rainer Bock. 105m. Reviewed in 35mm. (Ray Pride)