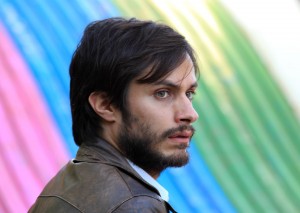 In “No,” Pablo Larraín’s stirring 1988-set political thriller about the campaign to dislodge the brutal dictator Augusto Pinochet after fifteen years in charge, Gael Garcia Bernal plays an advertising executive with an idea of how to shape public opinion when Pinochet bends to international pressure to call a “yes” or “no” referendum on his presidency. Chile’s Best Foreign Language Picture entrant, “No” is an intriguing sidestep from the director of “Tony Manero” and “Post Mortem.” Larraín’s earlier movies fix on ragged visual forms that evoke the inner lives of his characters. His producer has said “Pablo likes his camera to get dirty,” and the film embraces period cheesiness with proud passion. “No” was made on the video-recording equipment available in that era, such as U-matic video and Ikegami tube cameras, that record in a nearly square format, meaning that the quality of the advertisements that shake the country is the same as that of the fiction-from-fact. The actual campaign material, from commercials to jingles, is freely interspersed as well. Larraín says that esthetic choice is political, too: “Producing this film with analog video cameras is also a statement against the aesthetic hegemony of HD.” The result is brusque and darkly comic and weirdly ambivalent, a sometimes antic yet optimistic counterpoint to the U. S. campaign documentary, “The War Room.” With Alfredo Castro, Antonia Zegers, Luis Gnecco, Marcial Tagle. 115m. (Ray Pride)

“No” opens Friday at Landmark Century.