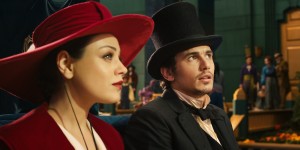 Who was Professor Marvel, long before he met Dorothy in the sepia-toned opening of “The Wizard of Oz”? He is Oscar Diggs (James Franco) in “Oz The Great and Powerful,” directed by Sam Raimi (“Spider-Man,” “The Evil Dead”). Set in 1905, this delectable 3-D fantasy adventure starts in black-and-white. Oscar is a cad of a carnie magician who knows Dorothy’s future mother prior to her marrying Dorothy’s future father. To flee a furious circus strongman, Oscar boards a balloon and lands in a colorful widescreen Oz. (That’s the same balloon that Professor Marvel refurbished to leave Oz at the end of the 1939 film.) Three characters from Kansas are doubled in this new “Oz.” One is a girl in a wheelchair (Joey King) who implores Oscar: “Make me walk.” He cannot, blaming “a distemper in the ether tonight.” Later, in Oz he will succeed in gluing the broken leg of a plucky China doll voiced by King. Inhabitants see in Oscar’s name and descent from the sky a prophecy come true. “You are going to fix everything,” exclaim the oppressed of the kingdom. Embroidering on L. Frank Baum’s stories, Mitchell Kapner and David Lindsay-Abaire script an archetypal arc for Oscar, from self-centered showman to civic savior, as he realizes his ambition to be “Harry Houdini and Thomas Edison all rolled into one.” (The New York Daily Graphic christened the inventor the “Wizard of Menlo Park” in 1878.) The first phantasmagorist of Oz, he deploys a phenakistoscope, smoke, sound effects and fireworks. His stagecraft mystifies the masses and tricks evil witches. As Oz, Oscar can only astonish the senses. His illusions, unlike witchcraft, cannot accelerate mass and alter flesh. Special credit sequences highlight how 3-D transports us: in the opening we move forward through one stage proscenium after another; at the end, the camera reverses and backtracks from one closed curtain after another. In between is a savvy fairy tale for skeptics of realpolitik as magic. With Mila Kunis, Rachel Weisz, Michelle Williams, Zach Braff, Tony Cox, Bill Cobbs. 127m. (Bill Stamets)