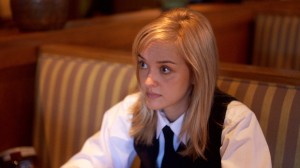 If anyone ought to live up to a lede like this in the New York Times in March 2012, it would be Bob Byington: “Among followers of the independent film scene, his name usually inspires a knowing, if furtive, smile of recognition: Mr. Byington, an Austin­-based writer­-director, is one of those best­-kept secrets that fans prefer to keep to themselves, for fear that if everyone knows about him, he won’t seem nearly as cool.” Byington’s new movie, “Somebody Up There Likes Me,” is indeed cool, traversing thirty-five years across a weird, winning fable about not letting your life pass you by, full of characteristic sly humor, unexpected comic charm and superbly integrated surrealism. Nick Offerman and Keith Poulson are veterans of Byington’s previous two features “RSO” and “Harmony & Me,” and Jess Weixler plays the woman they both love. Plus: a melancholy, poppy score by Vampire Weekend’s Chris Baio and animated interludes by Bob Sabiston (“Waking Life”). 76m. (Ray Pride)