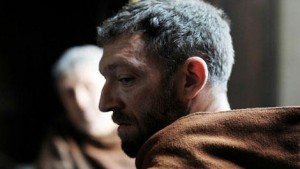 (Le moine, 2011) German-French director Dominik Moll’s been away from the art cinema for a long while and returns with “The Monk,” a vivid, lush, fevered sex-and-madness kitchen sink of a semi-supernatural movie that seems determined from every corner to make up for lost time and centuries of Catholic guilt. Vincent Cassel plays a seventeenth-century Spanish monk whose life began as a foundling on the Capuchin monastery steps, after which the friars raise him. After a career as a fiery, proud cleric, the path of righteousness leads, as it will, to temptation and extravagant depictions of sexual sin. Surrealism, sadly, does not take the head seat at the table—Buñuel and his screenwriter Jean-Claude Carrière worked on a version of the source material for a bit—and while the material cries out for a more brute, baroque punch to its Gothic strokes, other visual pleasures await, including the stark Catalan landscape, eye-opening nighttime processions, and eventually, a willingness to leap into the narrative void into crackpot climaxes. Based upon a once-banned 1796 novel. With Geraldine Chaplin, Deborah Francois, Josephine Japy, Sergi Lopez. 101m. (Ray Pride)