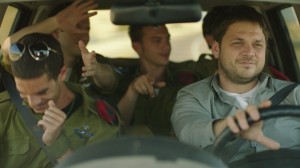 “Yossi” is Israeli filmmaker Eytan Fox’s sequel to 2002’s emotional “Yossi and Jagger,” taking off from that film’s tragic ending, where the lover of former soldier Yossi (Ohad Knoller) died on the front lines in Lebanon in Yossi’s embrace after their clandestine affair. It’s ten years later, and Yossi has walled himself off in a career as a cardiologist, essentially closeted and away from emotions and the tart, sudden bite of the things that we see happen to him when he reaches out even tentatively to engage with more than online porn. But Fox, as well as the understated Knoller, find the tender and sad details that convince Yossi that he can, should, will open up to feeling again. There are moments of unsentimental kindness. With Lior Ashkenazi, Oz Zehavi, Orly Silbersatz Banai. 83m. (Ray Pride)

“Yossi” opens Friday at Landmark Century. A preview is below.