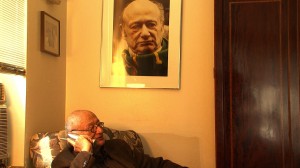 Edward Irving Koch was the 105th mayor of New York City, and one of those self-loving New York edifices that seemed to loom more with age, edged with nostalgic patina. Even after his three terms as mayor, the Bronx-born battler would throw a “How’m I doin’?” out at even the most contentious questioner on the streets of his city. But everyone’s a critic, including Ed Koch, a late-in-life writer of weak-tea movie capsules; he died, at eighty-eight, on the day Neil Barsky’s kindly documentary “Koch” opened in Manhattan. “Koch” gives his subject the final word, including on the most contentious issues that he handled, or mishandled during his 1978-89 administration. But, when questioned about his sexuality, about which he was always cagy, he’s quick with “It’s none of your fucking business!”  The footage harvested of Koch’s New York for the recent, relatively unsophisticated “The Central Park Five” documentary made the Koch era look frightful, and David France’s incendiary, invaluable “How To Survive A Plague” makes even harsher work of that decades-past moment. (Barsky adds Bronski Beat’s “Small Town Boy,” with the refrain “run away, run away,” to footage in the AIDS section of the film.) Still, Barsky captures both the younger, liberal Koch at the start of his political career as well as at the end, as the frail curmudgeon once more given his say. “Koch”‘s a kitten in its subject’s lap, never a tiger. As the film opens, Koch says over helicopter shots of the city, “Whenever I would fly home, especially if it was at night, there was the city of New York laid out before me, and I thought to myself, this belongs to me. It’s extraordinary, thank you God!” And of course, followed by the confident swagger of “Ha-ha-ha!” With Bob Herbert, Michael Goodwin, Wayne Barrett. 95m. (Ray Pride)

“Koch” is now playing at the Music Box.