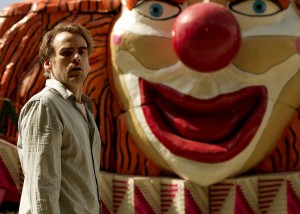 Baran Bo Odar’s “The Silence” (2010), based on a bestselling novel, is yet another accomplished, chilly yet simmering melodrama of the European north, a psychological study that starts with the murder of an eleven-year-old girl twenty-three years ago (in 1986) and then moves to the repercussions when a young girl’s bicycle is found on the same site today. Foreboding is Odar’s forte, with a gloomy, insistent score, a superbly chosen cast who work with supremely fretful faces eager to brood, and a sense of a small Bavarian town where everyone thinks the world could again be ruptured with sudden violence at any time. (In a director’s note, Odar praises his actors: “Their faces reveal feelings such as despair and emotional states such as guilt in all their nuances and show even the most fleeting changes. That’s where the real tragedy unfolds.”) Whether viewed in scenes of angry conversation or from god’s-eye-view overhead shots, the world is precise, unforgiving and, indeed, filled with its own form of geometric silence. (The sexual violence is muted but still disturbing.) The soundtrack, however, is rich and insists on its own weary, anxious mood. With Katrin Sass, Burghart Klaußner, Karoline Eichhorn, Roeland Wiesnekker, Ulrich Thomsen. 119m. (Ray Pride)

“The Silence” is now playing at the Music Box. The U. S. trailer is below.