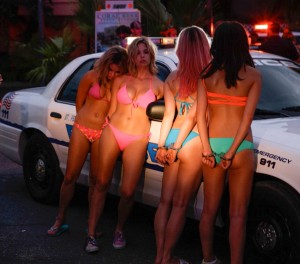 One of four female characters in Harmony Korine’s “Spring Breakers,” says that of her disillusion in the middle of a long, loud, bright, violent, neon-and-fluorescent-colored Florida spring break weekend, but it could also apply to some of the amusingly disparate and volatile reactions from its opening press, especially in the past week since its debut at the SXSW festival in Austin.

Four college girls—Brit (Ashley Benson), Faith (Selena Gomez), Candy (Vanessa Hudgens) and Cotty (Rachel Korine)—have little on their mind—seemingly—except going to spring break somewhere along the Florida coast, but they’re broke. So, balaclava-hooded, the four hold up a restaurant for the cash they need. Once in the Promised Land, they wind up in jail, where they’re inexplicably bailed out by Alien (James Franco), a willful self-caricature of a white-wanting-to-be-black pimp who is deeply, darkly conflicted about himself and the world, or the cartoon, he lives in. More guns and more disillusionment ensue, with Britney Spears’ musical numbers and a loping, warping score by Skrillex and Cliff Martinez (“Drive” and many Steven Soderbergh movies). Korine’s gotten more and more artful over the years at describing/disemboweling his wanton provocations, usually obscuring intention for sensation: “I never cared so much about making perfect sense; I wanted to make perfect nonsense,” is one of his calling-card quotes about “Breakers.” 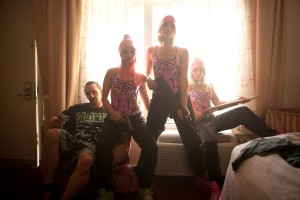 I’ve been thinking about this bitter-and-sweet combine, this sleek, nonstop objet d’art, since September, and there are many places this day-glo, pop-pumped puzzler lands. After a long lineup on a moody Toronto Sunday afternoon, my first exposure to Korine’s fifth feature was at the Toronto Film Festival in a row too close to the screen, wedged between an overly anxious yet deeply engaged elderly Asian man compulsively rubbing the thighs of his chinos with his hands, again and again, and what resembled the upstanding reincarnation of the late film critic Robin Wood, a gray-coifed gentleman in a deep purple jacket and equally regal Chuck Taylors. The placement made me anxious and anticipatory as well: what would someone else in the audience think of these three guys waiting for this Korine’s certainly transgressive, yet potentially exploitative slice of Florida-fried teen-sex surrealism? All the avant-punk-boho-young faces that had filled the side street alongside Bloor Street earlier were in rows packed behind me, but their enthusiasm for the film could be heard, in progressively more pronounced waves of laughter and occasional consternation.

“Let’s cause some trouble now…” What plays across our upturned faces turns out to be an energetic American version of a Gaspar Noé devil-dream, and the images by “Enter the Void” cinematographer Benoît Debie share a bioluminescent sheen with that bad trip, rough-edging and Instagram-coloring footage of drunken revelers on the beach and in hotel-room parties (very little of which contains the four protagonists) in slowed-footage montages that embrace as much as critique low-rent Bacchanalian excess, that displays underclass pop revelry while allowing a queasy sensation that we’re not here for sin. The forty-year-old filmmaker, shooting on film, is indeed after something more like art installation than crass, gleaming, glandular grandeur, although there is an amplitude: the prankish elements in a glowing satirical package come closer to Paul Verhoeven than “Girls Gone Wild.” Korine doesn’t have to wave American flags in the middle ground or background, television and pop culture’s downward dive has pre-waved for him. And issues of race and class, and underclass, course and erupt throughout, as if Florida’s rivers ran with sweat and subtext. 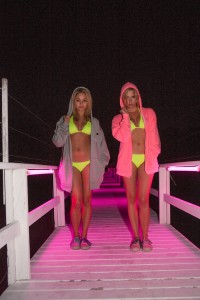 “Fugue” was a word I wrote down too many times: my impression was not of a sustained traditional narrative but of a gallery installation on a loop, or at an immense electronic music show, something that could be playing on all four walls at once, brightness and color bouncing off one screen, another, another. Dialogue’s treated the same way, another texture among waves of texture.

But part of Korine’s thrust is first to take the obvious, then repeat it—can the most earnest of the girls be unironically named “Faith”?—to thrive on mixed messages. Franco’s corn-rowed cartoon lizard—given to drawling unconvincing iterations of predator-speak like “I knew y’all was special, it’s written on your faces”—has a scene where he shows off his “stuff” to the girls, including drugs, bundles of cash and a vast range of weaponry, and it sinks in: Alien’s a pine-woods Gatsby, trading a golden grill for collar stays and weapons for land. “Look at my shit, look at my shit,” he says. “Look at my shit, muthafucka, I’m a fucking Death Star up in here.” On the soundtrack, as with other chunks of dialogue, he repeats, repeats, “This is the American Dream.” It’s the dream state of the eternal loop: dialogue and narrative scatting are treated the way Skrillex elongates, rebounds and resounds his sounds. Yet the repetitions begin to haunt, and in the case of revisiting the restaurant robbery late in the movie, where we see and hear the girls committing their crimes inside, rather than from tracking shots from the outside with sweet velocity, up close, clumsy and seeming more true-to-life than Alien’s sussurating “Y’all my muthafucking’ soul mates.”

In an interview with Paris’ Les Inrocks magazine, there’s a Korine quote that can be translated literally as  “I wanted to create a liquid story inspired by an energy without logic.” Or as a character says, “Don’t be scared of nothing.” Or as one voiceover loops in many iterations, “This wasn’t supposed to happen. This isn’t how it’s supposed to end. This wasn’t supposed to happen. This can’t be the end of the dream.” It’s Malick-meets-dubstep amid post-“Kids”-skin-and-sin with the costumes of Pussy Riot and a sunset-by-the-sea Britney Spears sing-along by Alien and the girls that is both ridiculous and touching. When real audiences buy this stuff, let’s see just how Alienated they will get by the end, before morals play out and the wish-fulfillment ending slides into the harbor.