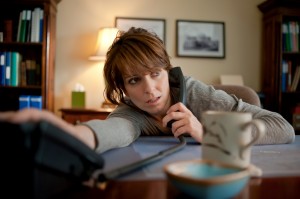 On the second page of  “Admission,” novelist Jean Hanff Korelitz shares the thoughts of an applications reader in the Office of Admission at Princeton University. Portia recalls an essay by “a girl from Greenwich, Connecticut who was smart enough to know she wasn’t smart enough, only just very, very smart.” The press notes for Karen Croner’s screen adaptation of this 2009 novel open with comparable self-knowingness, a “Director’s Admissions Letter,” where director Paul Weitz admits: “Thematically, I like stories of screwed-up people who think they don’t have anything to offer emotionally but who cobble together an unconventional family.” That fits “Admission” and Weitz’s “About a Boy,” if not his “American Dreamz” and “American Pie.” Tina Fey here plays Portia, who, after sixteen years at Princeton, is in line to replace her retiring boss. A lapse of professional ethics will derail that career path, as she commits to some long-postponed ‘personal time.’ All this is triggered by John Pressman (Paul Rudd), a teacher at an alternate school in New Hampshire (bearing Sir Francis Bacon’s motto “Ipsa scientia potestas est”) and his adopted son from Uganda. The globe-trotting blueblood do-gooder steers his prize student toward Portia: this adopted son of mini-mart owners is “a self-described autodidact,” he notes, and scored fives on eight Advanced Placement tests in courses he never took. (He also won an honorable mention for a ventriloquist act with a Rene Descartes puppet.) The weird father-and-son tension in Weitz’s “Being Flynn” and the broad father-in-law and son-in-law friction in his “Little Fockers” resurface in “Admission” as mother-and-daughter issues. Portia’s feminist mother is the once-famous author of “The Masculine Myth” who picked her inseminator on a train because he was reading “I’m OK, You’re OK,” the 1967 self-help bestseller. She never got his name but later tattooed “Bella,” as in Abzug, on her shoulder. Weitz builds a warm, wise comedy about parents and progeny. Married to a Princeton creative writing prof, the source novelist once worked as an outside reader for the Office of Admission. This may be the best in loco parentis take on college culture in years. With Nat Wolff, Lily Tomlin, Gloria Reuben, Travaris Spears, Michael Sheen, Wallace Shawn. 117m. (Bill Stamets)