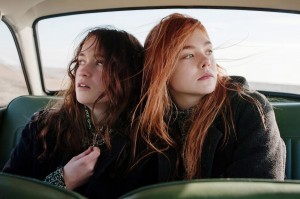 “We had a dream we would always be best friends…” Elle Fanning is phantasmagorically, shockingly great in Sally Potter’s tactile, achingly beautiful impressionistic memory piece of being a teen and among political radicals in early 1960s London on the eve of the Cuban missile crisis. It’s another inventive, felt miniature from the maker of “The Tango Lesson” and “Orlando.” Ginger and Rosa are two bristling girls, bursting with vitality, gossiping and teasing about boys and cigarettes, music and religion, and the politics of their families. Ginger (Fanning) is the activist; Rosa (Alice Englert) the randy one. The roster of grown-ups includes Rosa’s single mother (Jodhi May), Ginger’s supposed painter mother Christina Hendricks), Ginger’s pacifist father (Alessandro Nivola), and a gay couple (Timothy Spall, Oliver Platt) who bring along American poet Bella (Annette Bening). “I gather from your two godfathers here that you might be a militant like me,” Bella says. (A good simmering rollick is had by all.) But it’s the sensations of the film and the look of “Ginger & Rosa” that fully complement Fanning’s performance, especially when fantastic blues and greens are contrasted against the faux red of her hair against her pale face. Director of photography Robbie Ryan does wonder with low light (his earlier movies include Andrea Arnold’s three features, including “Wuthering Heights” and Ken Loach’s forthcoming “Angels’ Share). Interiors are exquisite miniatures, as are the ravishing close-ups of most of the characters. Then there are moments like when the girls are rescued by a couple of Teds in a motorcar, and no one knows what to do, and the scene’s surf rock ends and the girls are left by a stony, still sea, gulls barking. A dress-up-to-grow-up montage feels witty and true, and its use of “Take Five” seems earned. Tall, precocious Ginger asks questions, especially of her father, who says “It’s a bit kitsch,” indicating a crucifix she’s wearing, but when she makes one of her “good points!” he smiles and says, “That’s my girl, you’re an activist—not a supplicant.” But then Ginger is also a girl, as when she reads T.S. Eliot with a rumpled Teddy folded in her arm, swaddled in fine chocolatey shadow. Much of the night work, especially candlelit, puts “Ginger & Rosa” in the fashion of a memory piece rather than an objective history. But, as in all of Potter’s work, it is an estimable and lush solution to the most minimal of budgets: Girls will seek out alleyways and bombsites to smoke their cigarettes. They create the world. Not their world, the world. And the bomb is ticking… 90m. (Ray Pride)

“Ginger & Rosa” opens Friday at Landmark Century. The U. S. trailer is a pretty picture, below.