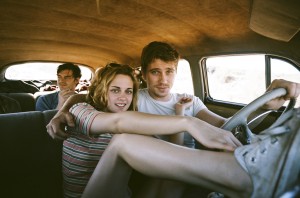 It was around 2006 that I saw a presentation by Wim Wenders and Walter Salles about road movies, and it was a little after Salles had taken over the project of adapting Jack Kerouac’s 1957 “On the Road” for the movies, which had earlier consumed multiple scripts, including one by Michael Herr (“Dispatches”) and directors including co-producer Francis Coppola, who would have shot in 16mm black-and-white and even Joel Schumacher (from another script by Russell Banks). Salles had begun crossing the United States to talk to whomever he could who had connection to the book, the Beats, Kerouac, Burroughs and so on. He showed a rough twenty minutes or so, and the talking heads were interspersed with stock footage and the result was compelling. Its fate today? Perhaps an extended Blu-ray extra? That I wish to see. I’m still more taken with the few seconds’ glimpse I had of Wenders squinting and craning his neck to look up at the image behind him of an elderly man talking in a book-lined New York apartment before spinning his chair backwards to watch the video rather than just about anything in Salles’ earnest adaptation. I like “The Motorcycle Diaries” (and, like that film, much of “On the Road” was shot across South America instead of the no-longer rustic United States) as well as some of Salles’ other work, but there’s a weird lack of drive and passion in José Rivera’s attempt at transporting Kerouac’s lingo to the page. What, indeed, would be the ideal translation to the screen of Sal Paradise’s perilous peroration, “The only people for me are the mad ones, the ones who are mad to live, mad to talk, mad to be saved, desirous of everything at the same time, the ones that never yawn or say a commonplace thing, but burn, burn, burn!” Would-be cool and real-life boring doesn’t come into that equation. The cast includes Sam Riley as Sal Paradise; Garrett Hedlund as Dean Moriarty; Tom Sturridge as Carlo Marx; Viggo Mortensen as Bull Lee and Kristen Stewart and Kirsten Dunst as two of the women Dean takes. The jumpily-paced “On the Road” is so very, very, very pretty: cinematographer Éric Gautier, with his darting, post-nouvelle vague moves here, has a remarkable eye, as demonstrated in “The Motorcycle Diaries,” recent films by Alain Resnais and several films each for Olivier Assayas and Arnaud Desplechin. Pretty, pretty pictures. 125m. Widescreen. (Ray Pride)

“On The Road” opens Friday at Landmark Century.